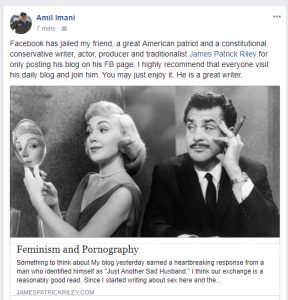 My most recent Facebook Jailing is a good excuse for me to think out loud about what I’ve come to conclude is the false hope of viral audience building on social networks. But first, read my offending blog and see if you can tell me how that might offend Facebook Community Standards. (Facebook certainly won’t explain it.)  For some time I falsely thought that Riechsführer Zuckerberg only blocked accounts when horrific ISIS be-headings streamed by on your feed, or Mohammed’s cartoon erection threatened his nine year old bride, but any critique of Islam will get you there now, and apparently so will anything that offends those kinds of ugly feminists you see demanding reproductive freedom for wombs that will never be visited.

I think social network platforms are probably good for advertising, so it may be some time before I delete my account entirely, or turn it over to someone out of the fray, but Facebook will likely make the decision for me. How long will it be before a call for tax reduction constitutes racism? How long will it be before a simple pronouncement—“genocide isn’t a nice thing whether the victims are white or brown”—makes an 8th grade white girl in Santa Monica anxious for some street cred as she Sharpies™ white guilt tattoos on her forehead for collective justice day at the Country Day School? As in: “Hey, I got an old white dude FaceBook jailed today.” 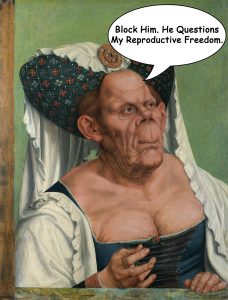 But I’m happy about my eventual banishment for one reason: We have overestimated the “broadcasting” power of viral posts, or at least the sustainability of marketing plans based on viral posts. I’m getting some clarity on this front, and I believe it will eventually help me build an audience. The “mirage” of viral marketing goes something like this: write or produce something so scintillating it will be shared by millions. That sounds like a good, low cost strategy, right?  After all, didn’t Donald Trump win the presidency by exploiting the free channel?

Let’s think that one through. In the old days of broadcast news, ponder how many times you watched a news segment, called a friend, and said “turn on channel 7?”  Odds are it wasn’t every night. In fact, it might have been once a year. (Some people “share” more than others, but even dedicated seed-bearers can only sew so much.)  The ad merchants and producers at channel seven lived for the night you made that call, but their daily bread and butter was more pedestrian. They were building you a nice Irish pub you visited every night for good company and interesting gossip. They knew you could only rarely be expected to run out of the pub, into the cold, and yell, “you gotta see this!”

Since 2009, I’ve been a party to two viral posts. After filming a scripted video we hoped would go viral, Victoria Jackson asked me, “can you tape my song about a Communist in the White House?” We just turned on the camera and let it roll, and then we pasted in a few Bolsheviks in the background to give it color. YouTube indicates we received 700,000 views, but I think it’s much higher. Last summer, in 2016, a little voice told me, “compare Trump haters to Pharisees.”  Google Analytics tells me that blog has seen 1.6 million readers, but, because of a gap in my account, I think it’s a little higher as well.

I think the point is that media production, and marketing, should never be based on the hope for a viral share. Doing that would make you lunge for an audience in precisely the sort of ways that makes current cable networks boring.

Anyone with an existing audience–someone like Donald Trump or James Woods or Bette Midler–would be foolish not to share their perspective with their existing fans, but for people like me, it’s better to build a good Irish pub, and sell good cheer and spirits, day in and day out.  The trick is to make jamespatrickriley.com one of your daily, or at least weekly, stops.

So I don’t care if Facebook bans me, or smelly feminists complain, because this is my home.  If you like it, come here, and share a drink and a story.