As I’ve written before, I firmly believe that racism is officially over in the United States, but that only applies to reasonably normal people.

There is, in fact, an approved, coddled and utterly “unchained” kind of racism out there, and it flows at fire-hydrant volume from people who have been encouraged to believe they are incapable of racism.  Unfortunately, this kind of racism is far too easy to document.  Get yourself an account on Twitter, follow any thread on, say, #ColumbusDay or #BLM or #Ferguson and if you make the mistake of contradicting conventional progressive wisdom, after being told you are old and ugly, you get this sort of thing:

Now I may, in fact, be getting very old, because I was taught the Martin Luther King dream, and that was fairly straightforward:  judge people by the content of their character and not the color of their skin.  Failing to do that, whether you’re black, white, brown or yellow, constitutes “racism.”  But when you identify this sort of thing as a racism, you get this kind of response: 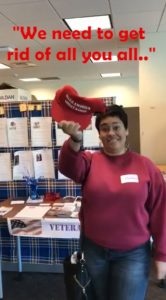 This isn’t just the raving of my Twitter correspondent, a self-described “Black, Albino, Atheist, Pansexual, Pan-Africanist Writer.” (By the way, am I the only one who thinks body-snatchers may have taken over America?) This has been the “logic-dodge” granted to social justice warriors of color for years.  It’s one of the reasons why Barack Obama never really had to pay the price for the racist ravings of Jeremiah Wright, and it’s also why an angry Latina anti-Trump activist, Edith Macias, could actually stand in front of University of California Riverside administrators and threaten genocide (5:18) without any remonstrance from the college.

I shouldn’t have to make the comparison, but can we even imagine what would happen if a blond-haired, blue-eyed college freshman stormed into the student life center and threatened genocide against people of color, after stealing a Latina’s hat? The campus would be in lock-down and Anderson Cooper would be booking his flight to the crime scene within thirty seconds.

My sense is that most of us white folk just treat this all like an adolescent phase. We see these kids as a brown version of Gidget on her first picket line to save the sea otters.  (“She’s threatening genocide; how cute. Oh, that Gidget..”)  I realize I’m playing into the logic-dodge definition of racism: you can only really be racist if you have the power to carry out the genocide.  Unfortunately, if the logic dodge is allowed for too long, this kind of adolescent racism actually grows muscle. Gidget turns into Madame Mao. You get the deplorable “knock out” game, where urban youth just pick out old people for punching bag practice. Failing to identify racism among minority cultures actually “green lights” the Islamic rape gangs of London. If you believe hateful things said, and believed, by minorities have no consequence, you shouldn’t be surprised if you find your teeth on the sidewalk.

In other words, if racism is an evil, and it is, it needs to be seen as an evil for everyone tempted to embrace it.  It must be despicable for all people, regardless of who their daddy might be. Someone actually needs to raise these children and stop coddling them, or they will grow into violent thugs.

To that end, the church — more than any other single institution — has an obligation to be a “grown up.” Pastors like John Piper have a higher obligation to be wise and firm, not hip and indulgent.  When hip hop artist Lecrae pumps a little pop culture juice into Christianity, and the church enjoys the bright lights, it shouldn’t be so star-struck it can’t tell Lecrae to wise up about indulging black racism.  All lives really do matter, Church, and if you don’t think so — I have news for you: you aren’t the church. When Lecrae announces his intentions to leave “white evangelicalism,” he should be reminded that any white person who announced the same intention, in reverse, would be considered an Aryan identity nut. We simply can’t let black members of the church have a pass when they say, or believe, racist things.

If your pastor is indulging racism by people of color, in other words, he’s not acting like a shepherd. He’s acting like a hip hireling, and he’s making it very difficult to write satire.

John Piper: God Not Quite Big Enough For Race Issues
The Idea of America..
Ads by Google