Something to think about

My blog yesterday earned a heartbreaking response from a man who identified himself as “Just Another Sad Husband.”  I think our exchange is a reasonably good read.  Since I started writing about sex here and there in my blog, I’ve had people confess similar sorts of problems, and even a few wonder if I have the same sorts of problems.  News Flash Folks: We all do. They don’t call it a war of the sexes for nothing. The Bard didn’t write “The Taming of the Shrew” for an audience who wouldn’t get the joke.

What I don’t think we stop to consider is the role feminism may have played in making everything a lot worse. In response to the graphic below a few of my male Facebook friends admitted that finding a woman today is just too difficult and dangerous. It’s not that they don’t want female company; it’s just that feminism has weaponized women. The fair sex still remains attracted to wealth and power and pensions, so there’s the age old daunting requirement, but even if you have that going for you, you may approach the wrong disgruntled women’s studies major and find yourself in the HR department. You may woo the Christian woman who has been bred to believe daddy has to be the mommy too, and do the dishes, and run the kids to the soccer game and still keep the wealth and power conduits flowing at full volume. Once you’re married, you might find yourself the unhappy victim of a culture that laments “toxic masculinity,” and you might find every institution, from your church to your kid’s school, asking you to be a little bit more like a woman. In short, it’s the polar opposite of the 1955 Housekeeping Monthly advice: 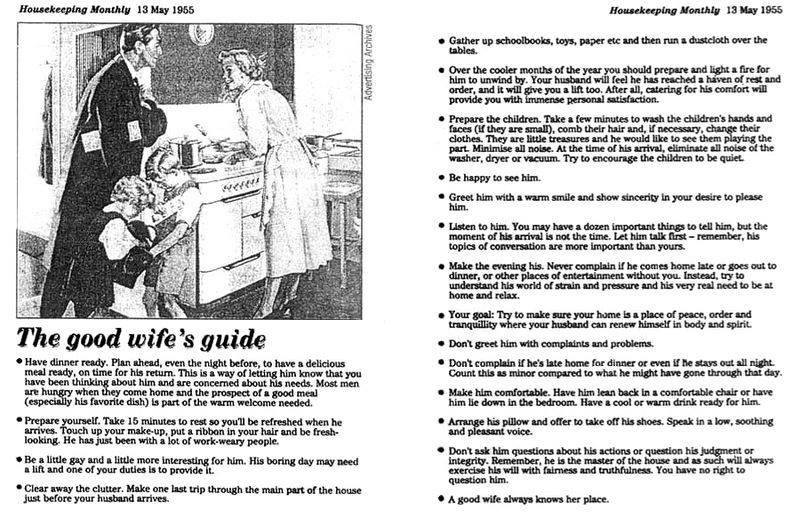 A lot of men, in response to all of that, are just saying, “I’ll pass.” Feminism, moreover, has actively encouraged women to be suspicious about marriage itself, to explore their sexuality, and in response, some men are saying, “explore is good.”  Have you seen the documentaries about the 4oish dudes who spend three nights a week Tindering new babes in their twenties? Apparently that practice tends to favor the very good looking guys, so how does that work out for you, ladies?  The good looking men, with jobs, are even more unavailable than they were before and even more likely to “ghost” you, (the new equivalent of the “you never call me” lament.)

For the rest of men, a lot of them are just looking to improve their bandwidth and bring in a new harem on video every night.

For the record, I think the 1955 version of life is more than a little cloying.  I prefer (and got) a woman who is my intellectual and professional equal, but this brave new world perfectly explains the pornography epidemic. Real live women are just too much trouble.

Do Not Deprive Each Other
Smelly Feminists