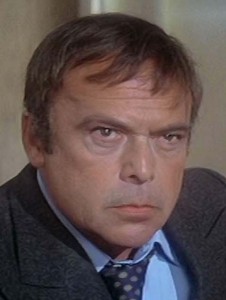 Trump-Averse syndrome has many incarnations, but for a few pundits, the behavior calls to mind the hilarious apoplexy of Herbert Lom’s Chief Inspector Dreyfus in the Pink Panther. Upon hearing a positive Donald headline, the Trump-averse coffee-spewer will start twitching, and fretting, and sputtering–if not literally, at least figuratively. In the last few weeks, one friend of mine has gone out of his way to imagine Donald Trump in ongoing liaisons with adolescent girls. Another quietly laments the outrageous lengths some Christians are going to justify a vote for Donald Trump. (This would be the grieving, pastoral snit.) Still others manage to post every gaffe, every Huffpo lamentation, every instance of MSNBC second-guessing. I can hear them now in the back of the faculty lounge, making tisk tisk sounds over their copy of National Review. It’s something like watching the career English literature teacher, comparing his meager retirement to the sprawling fortune of the first red-haired bully he introduced to Trollope.

Full blown Trump Derangement Syndrome, as identified by David Horowitz, however, is a thing to behold. Before yesterday, I had never heard of Erick Erickson, and I’m certain before my Max Lucado blog he had never heard of me either. So why would he bother countering my lowly, (but apparently wildly popular) blog?

Why? Well, why do you even have to ask, grasshopper? Aren’t you aware that among true Christians and true Republicans, any hint of praise for Donald Trump’s conservative credentials MUST be met with full-throated spiritual and political condemnation? You praised Donald Trump? You what?

Erickson is pissed that I rebuked that lion of the Lord, Max Lucado, the guy who saw something good coming out of the Supreme Court gay marriage ruling, the guy who cooed, “perhaps the hate-filled words will subside and clear thinking will gain traction.” (Now, that there is some pastoral bravery. They just don’t make old time Bible teachers like Max anymore, do they?)

Riley is right that God used “some pretty gritty characters to work His glorious and sovereign will.” What Riley ignores is that it was God’s sovereign will. God never asked HIs (sic) people to collaborate in the grittiness and sin. If God wants Trump to be President, God can do it without asking his people to endorse Trump.

Something tells me Erickson would have been one of those children of Israel pining away for those Egyptian cucumbers back in Goshen. “Why do we have to follow this murderer, Moses, to the promised land? Can’t God just zap us over there? Do we have to participate in this messy violence Moses always seems to bring with him?”

This “if God wants something He can do it for us” school of Christianity is precisely why we’re in this mess. While we’re waiting for God, the political left is writing new curriculum for the public schools, engineering new ways to sue gun manufacturers, and generally performing all kinds of mayhem without waiting for God. Meanwhile, we wait for a Moses that we would very likely have stoned if we saw him in the flesh.

And, no, Erick, a vote for Trump is not an invitation to participate in any of his real or feverishly imagined sins. How many Christians give a moral vetting to their attorneys or their surgeons? They trust their fortunes and their lives to professionals, routinely, without having the slightest knowledge of their moral or spiritual state, and now we are encouraged to equate the presidency with an invitation to the communion table? Remember the last studiously polite, soft-spoken evangelical peanut farmer who walked the Rose Garden while our embassy was under siege?

We’re electing a commander in chief, Erick, not the chairwoman of the girls’ purity committee — but to extend the comparison, have you ever encountered those believers who just can’t seem to forget the sins of the chairwoman back in her early twenties? Some of you folks aren’t just properly distraught over Donald Trump’s former sins. You wouldn’t even let him repent if he were inclined.  You’re actually a little overjoyed — aren’t you? — that Donald doesn’t think he needs to apologize for anything. (That’s okay; I know you pray for him a lot.)

Predictably, Erickson consigns me to the backslidden category: “it might also be that James Patrick Riley and his ilk are like those who fell away because they went off to have their itching ears scratched.” Ponder that one. I’ve fallen away and I want my ears tickled because I’m asking the church generally, and Max Lucado specifically, to stop swallowing camels and straining at gnats–to recognize the huge pro-life commitment Donald Trump has made in this campaign. I’m asking Max Lucado to consider the “weightier matters of the law.” Anyone recognize that verse? The one that might apply when Obama and Clinton get a pass on baby killing, from the pulpit, but Donald Trump is accused of saying a naughty word? It might actually be a good thing if Evangelicals stay out of politics; they don’t know what they want.

Erickson, who talks about politics quite a bit, seems to be getting confused. He is asking for a time-out.

The mere fact that someone would accuse Max Lucado and other Christians of being pharisaical because of a political vote is a big indication that James Patrick Riley and the like have their theology scrambled. They are looking for a savior in this world instead of looking to the savior coming from the next. Immorality is not determined by support of a political party.

Since when was it either/or?  Do we pray “thy will be done on earth as it is in heaven,” or is there some new polite version where we say, “help the devil win here on earth, God, and keep us from naughty words, because we know you have big things planned for us in the next life?”  “Give us really polite leaders like Mitt Romney?” “Lord, Make Sure We’re Happy Losers?”

The fact is that Erick Erickson and his ilk really do appear to enjoy the role of Pharisee — the approved keepers and fleecers of the flock while the pagans keep the state. They enjoy a cowed, timid congregation dependent on them for guidance, (and spiritual tithing ransom), because if anyone ever promised freedom, like Donald Trump, the Sanhedrin might not appear to be such a sanctuary. “Don’t criticize the Lords’ anointed; we got a spiritual ghetto to keep up here.”

What else could explain Erickson’s breathy surrender to Trump Derangement Syndrome? Look at these headlines over at “The Resurgent:”

A Vote for Trump is a Vote for Hillary Clinton
Clinton Vs. Trump 2016: It’s Over
Two Headlines the GOP Should Worry About
I Believe in God (Translation: Trump Voters Do Not)
Trump Against Trump
Ted Cruz Explains the Republican Disconnect

This isn’t polite, constructive criticism from political friends. It’s a kind of spasm. It looks like someone having a seizure, someone descending into a fit of worry that someone else in the department might actually solve the crime.

This Fall, Jesus is a Republican
Donald Trump and the Pharisees II
Ads by Google