This Fall, Jesus is a Republican

“Hey, can I get some help with the groceries?”
“Love to, but I’m a citizen of heaven.  I’m not really even here.” 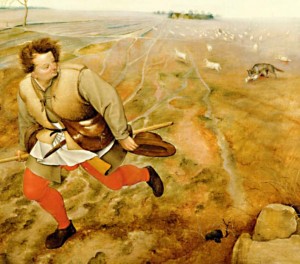 Let’s just take a look, folks, at a few of our problems, here on this earthly plane — as we’re working out our Citizen of Heaven obligations.

Last night, and the night before, the city of Milwaukee erupted into flames, complete with crowds of black youths picking their victims by skin color. “He white,” yells one of them captured on video, “beat his head – bitch!” (Who says chivalry is dead in the Black Lives Matter movement? It’s ladies first on skull breaking night.) Over the course of the summer, police have been targeted for assassination and scores of night club guests have been mowed down by an ISIS sympathizer, whose father — get this — attended a Hillary Clinton rally, cheering and hollering, eight weeks later.

This violence — egged on by presidential apathy, in the case of ISIS, and bully-pulpit race-baiting, in the case of Black Lives Matter — all comes to the surface amid the groaning weight of our failing infrastructure. Bridges are beginning to fail and American cities are being suffocated by the weight of their bloated retirement payrolls. My wife had to wait in a line at a California state agency the other day. Only one of three elevators was working, and the building smelled of rot. The rusty bolts on the upper floors of the republic are beginning to crack, and there’s a category 12 hurricane out there — $200 trillion dollars in federal debt not even reflected on the books.

In the face of these problems, many Americans are discouraged by their presidential choices. Some of them are toying with staying home or picking some forlorn Constitutionalist/Libertarian/Green whose candidacy is seen, even by themselves, as a kind of family joke. “Grandpa ran for president in 2016. No, I’m not kidding! He did! Really! That was back when you could still go hunting in America. That was back when you could write almost anything you wanted on the internet.”

Get over yourselves. If you were really that discouraged with the Republican party, you would have been raising money between election cycles. You never dug the foundation for a new party. You never built the walls. You are always last-minute about this lament of yours. You know that the third party choice has only helped your enemies. You’re okay with it because you think you’re saving the brand or something, or you’re a citizen of heaven, or you are so over politics, or you are so tired of being ignored. Bottom line, is that you are better than everyone else.

My last blog on Donald Trump apparently struck a nerve. There are a lot of believers who have been belittled, in church, for choosing a mere mortal, a sinner, a tough guy to address the nation’s problems. The roof of the church is falling in and a few of you know that you have to get a contractor quickly. But some of the hip young reformed types — the ones who have now binged watched “Game of Thrones” three times — are concerned that Donald the roofing contractor once appeared on the cover of Playboy.

He wants to fix the roof, people, and you aren’t giving him a chance because you are, I repeat, Pharisees.

“Jesus, why are you praising the Centurion and the Samaritan and that lady you compared to a dog? And, Jesus, what is it with that promise of heaven you GAVE TO A KNOWN THIEF on the cross?”

The sad thing is that many of you don’t even know you’re Pharisees, so let me share some blame with you: we’re all Pharisees. As a few of you reminded me, we ALL killed Christ. I did, and you did too.

But we need to understand something fundamental about the Pharisee spirit, in order to get past it. The Pharisee spirit is really about misplaced priorities. Our inner Pharisee doesn’t wake up thinking, “what really awful, despicable, evil thing can I do today?” No, we soothe our aching conscience by substituting our own set of virtues, the ones that are easy for us, or that don’t cost us anything. We give a lavish gift to the temple, and then we’re absolved from taking care of our elderly parents.  Pay tithing and let your parents starve, Jesus lamented. Sacrifice bulls and show no mercy. Travel all the way to Central Africa, make a convert, and then load him down with your Baptist legalisms.

Russell Moore, of the Southern Baptist Convention (an organization that couldn’t bring itself to apologize for white supremacy until 1995) is going out of his way to help Muslims build mosques, and wringing his hands over Trump’s so called anti-immigration policies. Does your conscience bother you, Russell? Are you ignoring the weightier matters of the law — protecting Christians and Jews from Muslim zealots laying in weight to kill them — and substituting your own virtue? Will a kind word at the planning commission make up for your failure to protect your community from terror? Donald Trump is saying what you should have been yelling: the beheading of Christians is outrageous, and it needs to stop.

Some folks actually justified their political apathy by reminding me that, as Christians, we are “citizens of heaven” — as though that could absolve you of helping your wife with the groceries, or feeding the poor, or protecting your families, or voting…

A shepherd fights off the wolves, folks. A hireling abandons them.Where are you going to be this November? Laying down your life? Or hiding in a holiness cave somewhere?