I have high standards for Christians.  I expect them to be able to think their way through the consequences of their actions, employing a Biblical world view.  I expect a Christian college to be a kind of “city on a hill,” and that means, that when repugnant ideas are discussed, they are thoroughly trashed.  If Bernie Sanders must appear at a Christian college, can’t he at least be burned at the stake, figuratively?  Can’t a real Christian intellect require this socialist hack to put his ideas through the furnace of cross examination — so they emerge on the other side properly charred for their lack of substance?

Bernie is a one note samba, which explains his appeal to college sophomores and other low information voters everywhere. He senses, along with Captain Obvious, that we should care about the poor.  Like every failed Socialist before him, he proposes to do that by hating the rich, and then taxing them back into poverty.  You don’t have to listen to it very long before getting the general idea: there’s no point in any individual, or family, amassing a fortune. Never mind that Mark Cuban might use money to create jobs a little more effectively than the federal government or that governments, in general, are not very good at even basic things, (like taking care of veterans wounded in combat, or keeping toxic chemicals out of rivers). Bernie sees a thoroughly managed socialist utopia, where everyone gets a government house and a government job and a rock-solid claim to equally rationed government misery. (For the really obtuse: see how all of that is working out in Venezuela right now.) 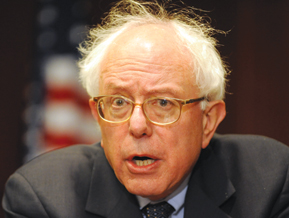 So, yes, Bernie is exactly the sort of candidate who would appeal to Americans who have never heard of Adam Smith, but even more depressing than Bernie appearing at “Liberty” University is the conduct of the believers who hosted him.  How can I put it?  We simply can’t knock down the gates of hell with men like this.  Nor can an audience of polite, bloodless Christians, agreeing to be scolded, do much to evangelize. (What would the message be?  “Join ranks with the cheerfully abused and insipid?”)   Bernie was the grumpy old man to their friendly flower shop counter service, and it might have been bearable if Bernie had limited himself to just bad economic ideas.  But Christians, listen up: that old man is a thorough child of hell;  he supports unrestricted abortion on demand, paid for by you.  He talks about helping the most defenseless and then he defends cutting unborn babies in half — all in the name of “liberty.”

What does he need to wear?  A red satin suit with horns on it?  You never let someone like that take the podium uncontested.  A real Christian academic should have been asking the tough questions, and allowing Bernie to respond.  A free exchange of ideas, remember?

Some of you Baptists need to drink a beer and get your wife out on the dance floor.  You are far too polite.  You need to study the manly nature of Christ’s wrath.  If Abdul Rahman Al Ghafiqi had faced, at the battle of Tours, men like the administrators at Liberty University, we would all be herding goats and beating our wives twice a day.

More Failure, Please..
The Debates, Round II
Ads by Google