The Debates, Round II

Leave Style Issues to Lindsay Graham, please.
We’re talking about the Leadership of the Free World

Okay, I didn’t catch it all, but I did watch the warm-up show with Petaki, Graham, Jindal and Santorum, 3PM Pacific on CNN.  (The air time alone would make me feel like the only adult playing in the little league world series.)   It was worth it just to make fun of Graham, who looks like a guy who spends the evening consoling himself with his Pottery Barn Catalog. When he says the words “Islamic Radical,” he’s trying to look tough, but it winds up sounding like Elton John getting angry at a bad flower arrangement. 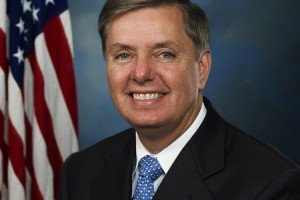 In my book, Jindal is the only one who should move up out of the Farm league, replacing Kasich who should just leave, along with Graham.  We need good solid members of the PTA, out there in the audience, seeking compromise on the refreshment committee, but Kasich actually defended the Iran Nuclear deal, on the basis that we really need strong allies like France and Germany.  There’s a certain brand of Republican who won’t be happy until they show how bipartisan they can be — even if they are trying to be team players with ISIS.  No thanks.  Kasich and Graham can go shopping together at Bed, Bath and Beyond or something, but they are not presidential.

CNN succeeded in making the front tier candidates look like bickering school girls, at a cheerleader bitchfest.  We were encouraged, once again, to wonder, aloud, how presidential Donald Trump’s rhetoric sounds, which inspired a peevish lament by Rand Paul and a thunderous round of applause for Carly Fiorina.

Let’s all stop for a minute, please.  We’re facing a world that threatens a Nuclear Iran, a “global caliphate,” a saber-rattling China, and a national debt approaching 19 TRILLION dollars, and we’re talking about style?  About word choice?  About how things appear? No wonder Lindsay Graham is still in this race.   I commend Carly’s passionate condemnation of Planned Parenthood, but thunderous applause for showing Donald how a gentleman behaves?  If you want to be treated like a lady, dont’ get into politics.  Take a lesson from Margaret Thatcher, and play it like a man, folks.  Your hair and your figure and your gut is going to be the subject of constant ridicule.  Ask Chris Christie.

Please, don’t let the media ask you any more questions about how to SAY things.   Let’s start talking about how you will DO things, even if the media doesn’t play along.

Killing Us Nicely
Papal Groupies And Other Joiners
Ads by Google