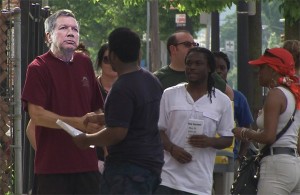 Presidential candidate and Ohio governor John Kasich found himself wandering  a dangerous South Carolina neighborhood last week, looking for someone to knock him out cold — literally.

“I’m behind the curve on this,” he told reporters, “this expression of young urban identity– this knock out game where distressed young kids with no opportunity go looking for an older person to just sucker punch.”

Getting a precise rationale for this campaign stunt was difficult as an out of breath Kasich tried to insert himself into a rough crowd loitering in front of  a Tiger Mart.    “I kinda brushed passed them, showing just a touch of white privilege, but they must have seen the press corps.  I don’t blame them at all.  This is the sort of thing you want to do anonymously.   I get these kids.  My dad was a post man.”

“This campaign has been so divisive,” Kasich went on, scanning the horizon for opportunities. “We have candidates boasting how they would just rip to shreds the Iran nuclear deal for example. That’s irresponsible.  If our European allies feel safe with a nuclear Iran, we have to get on board and be part of the team. We have to find common ground, and that’s why I’m trying to get just flattened by one of these poor young people.  I believe it will show that I’m willing to do just about anything to unite America.”

Meet Me in Emerald City
Christianity and the Election of 2016