Christianity and the Election of 2016

People wonder why I attend a house church.  Isn’t it obvious? 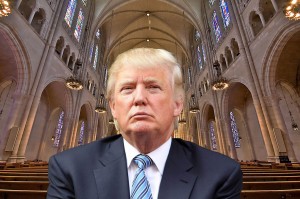 To answer those questions, I should back up and tell you what the church is, and what it is not, and what it has become.

The church is, literally, “the called out.”  It’s not a building; it’s a spiritual tribe, a brotherhood, of people who believe that Jesus Christ lived a perfect life, rose from the dead and paid the price for their sins. Since “sin” is central to the equation, it is a congregation very much defined by the moral law.  Believers are not saved by living the Torah, sacrificing goats, observing feasts, celebrating the “seven sacraments,” or praying over the finger nail of St. Barnabas. They aren’t saved by avoiding chewing tobacco and boycotting R Rated movies.  They are saved by the free grace of Jesus Christ, through belief on His name.

Someone who accepts that grace, who knows they did nothing to deserve it, submits to a discipleship, out of gratitude to their new King.  Christians aren’t saved by the moral law, or good doctrine, or a great sense of history, or by fine scholarship — but they are obsessed with all of those things, and more.  Because they are new creatures, children of God now and not children of the devil, they grow in grace and knowledge.  They embrace truth and ridicule falsehood.   They love good and hate evil.  They build hospitals and roads and found universities and write plays and compose symphonies.  They kill dictators and honor righteous authority. They brave remorseless, raging seas and convert natives to the truth.

THAT is the church.  It is a band of of fearless brothers and sisters.  Paul called them “soldiers for Christ.”

A real church — a real fellowship — would be a kind of moral boot camp.  Fathers would be encouraged to love their wives and sacrifice their lives for them.  Wives would hear the example of the Proverbs 31 woman — loyal and obedient to her husband, but enterprising, prosperous, kind.   Those who cheat on their employers would be scolded.  Those who file fraudulent insurance claims would be rebuked.  Marriages would be healed and not sent into the divorce courts.  Civil servants would be reminded, powerfully, never to abuse their authority and citizens would be taught to respect that authority, while it remained true to God’s will.  Politics would be very specific.  Anyone who voted for ardent pro-abortion politicians and refused to repent would be excommunicated.  Believers would be challenged to help the poor, not through state coercion, but out of a glad heart.  The rich would be held to a very high standard indeed, and yet the poor would receive no special favor in matters of justice.  Liars would be scolded.  Adulterers would get a dose of scalded moral conscience, and be shown the door if they didn’t repent.   The pastor would be loved — and feared.  And yet for all of that, there would be high celebration — music, scholarship, dance, feasting, and good wine.

THAT is the church.

Unfortunately, the “church” has become something else.  The church has become many different things.  On the far left, among the Unitarians and some of the Congregationalists, it has become a meaningless secular virtue club, embracing extra-Biblical causes — global warming, civil rights for sexual deviants, even new age nonsense and the occult.

Matt Walsh is lamenting the conservative church, but that isn’t much better either.  With rare exceptions, the church is sheepish about any particular application of God’s will on matters of policy, art, and culture.  This church has a hard time disciplining outright fornicators and adulterers in their midst, let alone scolding Barack Obama from the pulpit.  The modern church is many things, but really succesful big and small churches are essentially social clubs.  Life is hard:  isn’t Jesus great?

What could we expect from such a club?  Not much.  Years ago, one Baptist pastor encouraged me to join his congregation.  I said to him, “you would deny me communion for having a beer, wouldn’t you?”  He said yes.  I then asked him, “but you give communion to members of your church who vote for baby killers, don’t you?”  He hung his head and admitted the truth.  His church has majored in the minors.  It was essentially an AA club with a little Jesus varnish.

Matt — what can we expect from these folks?  Even the Catholic church, long a crusader on the life issue, doesn’t really scold it’s pro-abortion voting members, does it?   The current pope spends more time questioning the obvious need for walls and very little time scolding politicians who vote for baby killing?   Why would we expect these folks to make a heaven-influenced choice between Donald Trump and Ted Cruz?   Why wouldn’t they fall for the more flamboyant performer?

What can we expect from “Christians” who attend these churches? Can we blame Christian political activists–who have been rebuked by everyone from Rick Warren to John Macarthur to Pope Jorge– if they look at the political landscape and conclude, “this republic is too morally dumb to make intelligent choices?”