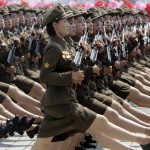 Here is what I still find startling about the entire GLAAD public communications manifesto: removing sexuality and religion from the discussion for a moment, the precedent of any group declaring a preemptive ban on criticism feels creepy and totalitarian. Imagine yourself unable to express, say, any negative opinion about Republican leadership for fear of being declared a bigot. Imagine yourself unable to question GMOs for fear of being fired from your job. Imagine a particularly violent inner city gang demanding you wear their colors or risk being called intolerant.

The self-appointed gay sensitivity police are demanding what can’t be given: abject surrender of the conscience. They apparently can’t function without uniform and unquestioning approval.

That isn’t Western Civilization. That is North Korea.