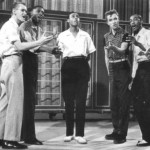 If you never grew up in a religious community, you might not understand how religious you really are.   Even if you claim to be a proud, free-sailing atheist, you do have a religion;  you do have a set of commandments you follow, along with a sense of what is sacred, and you very likely have your own approved monastic order and temple ceremonies.   You just don’t admit it.

Take this sermon that appeared in the LA Times for example.   Now, of course, the LA Times did not called it a “sermon.”  The writer, Michael Hiltzik,  probably calls it a “column” or  a “blog,” but it starts with a fiery condemnation of sin:

I got the gist of the “Duck Dynasty” thing after my first and only viewing: bunch of rural jackasses who somehow struck it rich get brought into our living rooms to be laughed at by the rest of us aristocrats.

Here the preacher draws a strong connection between living in the country and being a “jackass,” and he also decries the accidental accumulation of wealth, or perhaps just the accumulation of wealth at all.   He also humbly acknowledges the presumably urban sin of pride in calling his own crowd “aristocrats.”   I just love good old fire and brimstone like this, personally, but on behalf of the many jackasses I know, I think this is also a tad bigoted.   I would not go so far as to call it hate speech against jackasses, but I’m pretty certain it would make many in the jackass community very uncomfortable. To call someone a rural jackass, as opposed to the regular, urban kind.  Ouch…

Pastor Mike then goes on to remind us that sin lives within us.  None of us is clean:

A&E knew what it was doing when it put these people on the air, so its show of indignation in “suspending” one of them for speaking out against gays and the aspirations of African Americans falls a little flat.

“These people.”  Ah, yes, “those people,” or “you people.”   The urban faithful are allowed a few demographic prejudices of their own.

..And Sometimes the congregation just needs to be reminded that the rich and powerful television networks, in claiming holiness, are only puffing themselves up with pride.   The faith clearly demands that gays never be criticized, ever, and when A&E pretended to be protecting our monastic brothers and sisters, they were only admitting early pandering on their part.   In Pastor Mike’s religious community everyone knows that gayness is an identity, not a behavior, and that you came out of the womb either homosexual (holy) or heterosexual (beautiful in its own way too, but benefiting from majority status and thus sinful and macho and likely to harbor anti-homosexual sentiments).   Pastor Mike reminds us to remain humble in all of this and not to be either a “rural jackass” or an urban television “aristocrat.”

And then Pastor Mike really waxes indignant against Sarah Palin and Governor Bobby Jindal for not expressing outrage at Phil Robertson’s “anti-gay” comments.  How many times must he preach this?   How many times must Pastor Mike, with tears in his eyes, rebuke the sins of this generation?   Expressing a reservation about homosexuality?   Using the tongue to criticize gays?  Woe unto you!

And it doesn’t stop there.  Phil Robertson failed to have the proper memories of his youth.

“Where we lived was all farmers. The blacks worked for the farmers.  I hoed cotton with them. I’m with the blacks, because we’re white trash.  We’re going across the field … They’re singing and happy.  I never heard one of them, one black person, say, ‘I tell you what: These doggone white people’ — not a word!  Pre-entitlement, pre-welfare, you say: Were they happy? They were godly; they were happy; no one was singing the blues.”

In Pastor Mike’s religious community, this is blasphemy.   Someone having memories of happy black people prior to federal entitlements and LBJ’s war on poverty?   Are you kidding me?   Why didn’t Phil Robertson do what any faithful person would do under similar circumstances?   Go out and find some really miserable black people!   Get with the program!   How long must we put up with this spiritual sloth?   And, mother earth forbid, if you did, by some highly improbable circumstance, have memories of happy black people, would you please keep those thoughts to yourself?   Too much information!  There are children present!

Yes, you folks have a religion.   It’s pretty rigid.  It has its own dogmas, its own archbishops, and its own set of televangelists fleecing the sheep, so, please…

You can keep your own theocracy.   We prefer a rational faith.

Study: Men Feel Dissapointed When Turned Down for a Date
GLAAD: Conviction Control
Ads by Google