What’s Love Got to Do With It?

Can we really build the Kingdom of Heaven with men so bloodless they have never desired a woman? 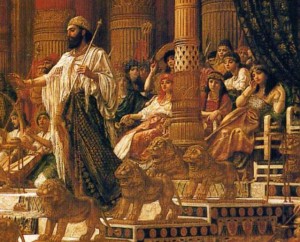 If denying ourselves for Christ were as simple as embarking on a starvation diet, the Kingdom would be built by a legion of ecstatic virgins, stammering repentance as their flesh failed them.  Sleepless, sexless, bloodless, without limbs or eyes, having denied all affection for even their own families, passively meditating as their sisters are raped and hoping to have offended Caesar sufficiently to warrant a cross,  they would stumble into the Kingdom having never understood that even the Son of God spoke in hyperbole.

After coming to Christ, we still go on in life,  don’t we?  We live, plant crops, hunt deer, build roads and factories.  We marry, and are given in marriage.  We feast and celebrate and read to our grandchildren. We are even expected — aren’t we? — to be found “occupying” and tending the vineyard.

We even make love.  Very few of us are really called to celibacy. Personally, I don’t think I’ve ever met a happy Christian celibate, and if the Roman Catholic church teaches us anything at all, it might be that vast numbers of the flock are terribly wounded by a blanket call to such denial among the fraternity of pastors.  If there really were something “holy” about everyone in the body denying their sexuality, the Shakers might have had it right, but didn’t the last one pass on to glory in 1993?  Sexual passion, getting “turned on,” is part of the life Christ created for us.

A simple, but apparently necessary, reminder:  We are all here today because somewhere, someone got excited.

Someone saw his wife walk down the hallway wrapped in a towel. Somewhere, under the breakfast table, after the kids left for school, a woman touched her husband’s knee and whispered, “be late for work.”  Two college kids, marinating in the music, lock eyes across the room, and 28 years later, a young attorney is telling his beautiful colleague, “I was conceived at a Kappa Kappa Gamma party.”

She smiles, and the cycle begins anew.

This may sound shocking, but this process isn’t primarily about love, even within marriage. Love should be there, but it’s really about desire — something that, in church circles, immediately morphs into ugly, despicable, embarrassing lust.

You pagans and agnostics can probably stop reading now.  Your heads aren’t clouded by the sin issue, so you won’t understand the burden faced by some religious folks.  My people are mostly church types of various sorts — Baptists, Adventists, Mormons, Reformed Presbyterians, Calvary Chapel types, conservative Catholics, Pentecostals.  Some of them feel a burden for holiness so profound they get uncomfortable even thinking about, much less trying to define, something called “righteous desire.”

There are three things which are too wonderful for me, Four which I do not understand:  The way of an eagle in the sky, The way of a serpent on a rock, The way of a ship in the middle of the sea, And the way of a man with a maid. — Proverbs 30

Bible scholars could add more dimension to this text, but it’s clear: God celebrates sexual desire.  Clearly, throughout the Word, we see both lamentations thrown at abused sexuality and poetic praises offered in its celebration.

But here’s the problem:  there’s a vast difference between the Holy Word of God and the way we see it lived out in church culture.  The Bible, let’s face it, folks, is a very honest and unsparing sexual soap opera.  Sex doesn’t seem to embarrass God at all.  Tamar dresses up as a prostitute and seduces her father-in-law.  Dinah gets ravished. The soldiers of Israel spend the night at a harlot’s house.  Solomon shares his love life with us, and it’s explicit.  David, the man after God’s own heart, has concubines.

The actual “wonder” of the Proverbs 30 man and maid isn’t primarily a picture of love.  It’s a picture of fulfilled hunger, of desire.  And if you think this isn’t true, ask any righteous, faithful Christian husband what has to happen in order for him to make love to his wife, the one he loves and has chosen for life.

He’s got to be excited.  He’s got to be so filled with desire, so anxious to remove clothing, so intent on having his prize, that he’s literally hard with hunger.  Like Solomon, he’s got to be so needy, he wants to climb her tree, hold her arms, and feast on her breasts.  In other words, he’s got to be turned on, or it isn’t happening. Women, on the other hand, may unfortunately suffer through joyless sex, but joyless sex for a man means it just doesn’t take place.  There are vastly different physiological and emotional imperatives in play.

That particular dimension of sexuality may not find its way into the pulpit very often because on this front, even the Bible is content to call this kind of desire beyond understanding, but since it’s an undeniable part of the equation, men are left to wonder how their sexuality can be “holy” or “sacred” or “God honoring” when, in practice, it has to feel something like fantasy to work in the first place.  If a bridegroom sees his fiancé across the room on the night before his wedding, and his thoughts turn explicit for a moment, are those mental images made holy by a ceremony the next day?   Was his desire made pure, months before, when he promised his life to her?   Or was that desire a good thing by itself?  Was it a good thing when God created teenage boys relieved of their longing by explicit nocturnal dreams — or should they wake up disgusted with the very architecture God created?     Can we really build the Kingdom of Heaven with men so bloodless they have never desired a woman?

When Jesus warned us against the adultery of our eyes, He spoke to our ongoing dissatisfaction with our state in life, our gluttony, our desire for more, or for having that which belongs to someone else, but to paint with that brush too broadly is to sully the gift of sexuality itself.  A beautiful woman walks into the sanctuary, pastors. She’s hot.  Of course, she’s desirable.  Of course, someone is blessed to be making love to her, and of course every red-blooded man in the congregation, if he’s honest, is thinking the same thing. Does that mean, everyone is formulating a plan to make purchase of her?  Please.  Back off and calm down.  That sort of hyper-crucifixion of the flesh is precisely what causes the downfall of Christian men. As natural hunger works against a hyper-legalistic standard, the flesh eventually prevails, completely.

Demanding, moreover, that sexual intercourse carry with it, a holy, loving, feminine glow may work for a few women, but it doesn’t work for men, and I don’t even think it works for honest women either. We don’t want to “take” what is ours; we want it to be given, anxiously, needfully.  We want to believe that our partners can’t live without us sexually.  For the after hours report at the Bible study, we may talk about romantic love, and commitment, but the bedroom should be a sex feast.   You wouldn’t finish buttering a piece of bread, look at it tenderly and then quietly pretend your hunger was really about “love.”  It makes you look like a weirdo;  there’s a reason pagans can’t understand neo-Victorian Christian sexual attitudes: we’re over-thinking and over-spiritualizing it all.

There’s also a reason why many Christians fall to pornographic addiction: they don’t understand the Apostle Paul or King Solomon, who gave us very specific counsel on these matters. Solomon was bold enough, honest enough, and hungry enough to celebrate one of his many wives for us, publicly, and explicitly in divine scripture.  The Apostle Paul told us, that if we were not gifted with celibacy, married men and women should feast on each other sexually, and “satisfy each others’ needs…so that Satan will not tempt you because of your lack of self-control.”

When couples deny each other, or when they carry past shame with them, or when they allow the devil to make sex into a blemish, or when they are too tired for each other, or too selfish with one another, or too “holy” with each other–one or both of them will go somewhere they shouldn’t.  It’s not a matter of just agreeing to sex. Marriage is a covenant to enjoy and celebrate sex.  No spouse this side of Saudi Arabia wants a sex slave. They want someone who loves having sex with them.

And if you have a problem with that, you need to get back into your Bible.

War, By Design
The Peacemakers
Ads by Google