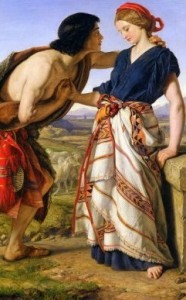 I’m fairly certain that when women consider male sexuality, there’s a very thick layer of pure disgust baked into the cake.  A friend of mine told me his wife  caught their son looking at pornography and her reaction was a mixture of outrage and loathing.  She was disgusted with both him and the images.

I’m not defending pornography here, but it’s very easy, in the process of facing a sin, to make a young man feel as though he is a hopeless degenerate, to leave him feeling that his very desire is ugly, and that women, by extension, are evil.

On one front, men and women are at war,  by design, and they will never ever quite understand the perspective of their enemy. I’m reasonably convinced that the Almighty built this into the system, or the presence of a tedious peace would produce absolutely no romance, no sex, and no children. Sex owes its powerful attraction, in part, to the utter improbability of it ever happening.  Ask any 14 year old boy about that.

Before I get into this, a disclaimer: I have a very happy marriage. I’ve been wed for 27 years to the same woman, who is my best friend, and who has given me six beautiful children. She’s my business partner too, and we share everything.  We’re together constantly. It’s likely she might not even read this, however, because she and I have talked about this before, many times, and she is, after all, in the enemy’s camp. She’s a woman, and she will never understand men, just as I will never understand women. Those are the unstated “facts of life.”

The disclaimer is necessary, apparently, because people tend to worry that anyone talking about sex is troubled by it, but it’s been my experience that everyone is troubled by sex. Most people just don’t talk about it — and they worry about those who do. Over the years, some of my friends who were the most into modesty standards, purity rings, head coverings, and tee-totaling were precisely the ones  who wound up running off to Reno with the yoga instructor.

So get over it. I’m not two months into a bad live-in relationship and I have a reason for talking about sex, so I won’t apologize for it. It’s pretty simple: in our culture it is rarely discussed honestly, and, guys, it’s almost always broadcast from the enemy’s camp.  You hear about sex from the woman’s perspective or from a guy who is pretending to be a woman, because he thinks that’s the Jesus or the Oprah  approved way to talk about sex. Sex gets turned into love, and as lofty as that sounds, it’s a bit like hearing the prom queen tell you, “let’s just be friends.” No man in the world has ever taken that for love. Unfortunately, this high-minded brush-off isn’t just the stuff of failed high school romance. Every night in America many men are re-living that high school rejection inside their marriages. They are hearing some version of “let’s just be friends tonight, honey.” Many teenage boys are being called pigs for desiring women. It’s just a very plain reality: women do not understand the indiscriminate, immediate, impulsive nature of male sexuality.

Which is part of the war, of course. If there is real love in a marriage, real friendship, real romance, no relationship should be like the old joke about the definition of Irish foreplay:  “brace yourself, Mary-Pat!” Neither men, nor women, can simply be sex dispensing machines.

But if “friendship” and “love” and “thoughtfulness” are made the spiritual superiors of hot passionate sex, the war will start to turn sour very quickly. Ladies, we don’t need you to be thoughtful in order to get excited about sex. We need love too, but we actually don’t need that for sex. We think sex is pretty good all by itself. If we ever hear from you the words “just sex” or “just my body,” we’re being told that our needs are less important than yours, our desires are frivolous compared to yours. We don’t think there’s anything frivolous about your body at all, and we wonder why you do.

What happens to men who are told they are frivolous?  They resent it; they run away–either in reality, or emotionally. If you ever make fun of your husband’s sexual needs, he might not tell you, but you’ve just launched the nukes.  If you are rolling your eyes right now, you might have already nuked him several times.

The Bible tells us that Rachel was “fair of face and form.”  Whatever she was wearing, Jacob could see her curves, and he thought she was hot.  He worked seven years for her, and poor Leah, with the weak eyes, kept thinking with each child God gave her, she would win Jacob’s love. For her, sex seemed to be a means to an end — more sons as a way of winning her husband’s love.  It didn’t seem to work, and it’s tragic, but it illustrates the difference in perspective between men and women. Jacob was apparently able to function sexually with wives and handmaids thrown at him; he didn’t need a bouquet of thoughtfulness and conversation to enjoy his time in the tent. He was living out a male fantasy.  When he returns to camp every night, the women are fighting over him; the ladies are furiously bent on their own maternal objectives, and Jacob is happily along for the ride. “Take my handmaid! I bought you with some mandrakes; get in that tent.” It doesn’t sound anything like the sort of hyper-theoretical love talk you might hear at an evangelical Valentine’s sermon. The women of the Bible knew what they were after — and so did the men. There was a war going on, in other words, but neither side insisted on conquering the other’s psyche or emotionally trans-gendering  their opponent.

The war was sweet, because they knew, and accepted, and ultimately loved their enemy. Modern culture, even modern church culture, has been drinking too deeply from the feminist well, which demands a unisex set of values. We solve all problems by assuming men should act something like women, and it’s a bit like the lady who tried to advise her friend how to train her husband.  “If you keep training him, he’ll be just as gentle as a kitten,” she said.

Sex, Abortion and the Holocaust
What’s Love Got to Do With It?