I suppose I make an odd culture warrior.   I don’t fit the James Dobson brand.  I hate the war on drugs, along with its serial abuses against the Bill of Rights.    I don’t think the church talks enough about sex,  and it certainly doesn’t do a very good job celebrating the sort of sex God intended.    I love good wine.   I watch lots of movies, and I can’t stand the sort of “wholesome films index” that would block 90% of Bible stories from ever being  brought to the screen. Bad Sunday School film annoys me.

But I read scripture and pray every day, and I’ve participated in Tea Party rallies,  and I’m an abortion abolitionist, so that means a few Republicans think folks like me should keep quiet.

In the ongoing war for the soul of the GOP, there’s a battle between those, like me, who want to discuss where government and culture intersect, and those who believe government should be something like a trip to the office supply store:  neutral, bloodless, efficient. 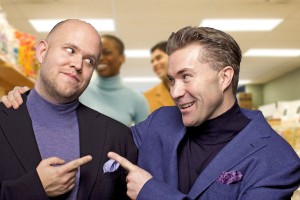 I’m going to call these types the Office Supply Singers, because we’re GOP, after all, and we’re not hip enough to hang out in a coffee/literature bistro.  This clean cut GOP boy band is known for getting things done.  They don’t talk about anything very personal, and certainly not anything moral or spiritual.   They value efficiency and they believe the country is really hot for a bunch of well dressed MBA types.  Don’t talk church with the , I mean voters. Remember:  we live in a country that allowed Ted Kennedy to sit on the Senate Judiciary Committee for 30 years.  The Office Supply Singers have been around for a long time.  They were the “bipartisan” types that allowed arch-lefties to flourish:  Bob Dole was in the group and so was John McCain.   John Boehner sits in regularly, along with Paul Ryan.

Let me see if I can be as tactful as I can in describing the Office Supply Singers.  How about this:  they are clueless half-wits.   There’s a reason why 11 million viewers tune in for Duck Dynasty, and why New Testament morality strikes a chord with the Republican base.  Ready for this?  It works.   Families who take care of themselves, who nurture their marriages, who pay their own way, make for the smaller government.  You simply cannot manage a republic chock full of people like Ted Kennedy.  (One was bad enough.)

But the neutral corporatist, building market share, can’t stand talk about abortion or life issues, would rather just bow to every rainbow and jihad demand that comes along, caves to quotas and identity politics, because, at heart, he just doesn’t have a lot of fight in him.   Common Core and Agenda 21?   That’s just all wing-nut chatter to him.  He’s trying to reduce his overall tax burden by making things efficient — and that’s it, brother.  Don’t distract him with what he considers non-essentials.

But when the tidal wave of unwed mothers gets even worse,  when everyone has to pay for every abortion in the 50 United States, when there are two standards of free speech in this country — one for identity-approved expression and another, more restrictive, for the majority culture, those who scoffed at the culture war are going to come to understand what even Barack Obama understood in his evil way:  we are deeply spiritual creatures.   We respond to leaders who can paint a transcendent picture of a better future.

If you ever get to wondering why 4-7 million evangelicals and Constitution voters stayed home last time.  Ponder this:  we aren’t going to follow an Office Supply Singer over a trench and out into the battle field.