Study: Men Feel Dissapointed When Turned Down for a Date 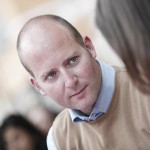 Madison, WI (Rueters) – A groundbreaking study out of Hollick University is shedding new light on the mysterious ritual of dating. In a $10 million federally funded research project, studies indicated  the vast majority of men who ask a woman out on a date, only to be turned down, feel disappointment.

“In case after case,” reported Professor Tim Wahlings, “men who had worked up their courage, squared their shoulders, took a deep breath, tried to look confident, only to be turned down by the lady, felt various disagrees of rejection — from mild disappointment to crushing despair.”

“Our premise,” Wahlings went on, “was that with all the pain a potential relationship might cause, men would feel a sense of relief at being spared the potential trauma, but no.   There seems to be a blind, romantic faith in the hope of happiness, and most men seem willing to undergo these crushing disappointments in order to chase that hope.”

During the press conference an attractive female reporter toyed with Whalings, who is single.  “Question,” she asked, “will you take me to dinner tonight?”

“Are you kidding?”  Wahlings responded, blushing.  “Of course!   Of course I will.”