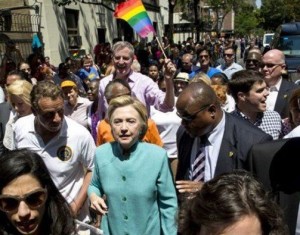 You have had days like the one I’m having — the kind where you can’t seem to get the image of a rubbery-legged Hillary Clinton collapsing like a theme park pooh bear with heat stroke into the bowels of a black van– scraping off a shoe as she goes. The Democratic nominee for the president of the United States had been turned into a wilting bean bag, and the grim-faced precision of the secret service didn’t make it any better. It made it far more disturbing; they were obviously accustomed to this pudgy, slack-faced paralysis of hers. (The boss, apparently, can become incapacitated at any moment; the potential leader of the free world goes in and out of consciousness. Develop procedures, people. Grab her by the elbows and get her ass behind the tinted glass.)

If a guy on the street, Zdenek Gazda, hadn’t captured it on video, we would all be called conspiracy nuts for even discussing it, and you get the sense the Clinton people wouldn’t even have hatched the pneumonia story had not a citizen journalist made “overheating” in 79 degree weather look too ridiculous even for them.

Smart phones, instant video and instant worldwide distribution have all made the world both more transparent, to be certain, but they have also made it far more culpable, more sickened by its own apathy after the story has broken. The real story is never very convenient, and the solution is even more inconvenient, so we’re being asked, over and over again, to disbelieve our senses. Watch a candidate for the president of the United States collapse like a drunk, and then hear someone officially blame it on allergies. Watch a jihadi zealot gun down night club guests, or mow down tourists with a delivery truck, and then be told no one really knows what it all means.

Evil has never been more visible and less worthy of official confrontation.

In the old days, when news gathering was expensive, (and profitable), when local network news reporters weren’t covering a story with a selfie stick and an iPhone, the story could mature for a few hours at least, on the desk of an editor or a producer. The sponsors could be contacted, the local congressman consulted, and if the story matched the narrative of approved evil (corporate profits, value-voter hypocrisy, the progressive left’s ‘usual suspects), they ran with it. When you control the approved villains, you control the approved methods of extermination.

But now these unwashed citizens can just post anything they see. These days, a state of the union address gets far more honest and penetrating commentary on Twitter and Facebook than anything Dan Rather or Tom Brokaw could ever have mustered. No pundit, however bright, can beat the remorseless meritocracy of Twitter or Facebook. Even your great grandfather has signed up, and he’s keeping up (and schooling) the young folks. The American people have always been brighter than the pretty boys and the big boobs that make it to the top, but we never really had a chance to talk to each other the way we do now.

The internet should have been, and maybe still can be, a good thing.

But it’s a bit like a small company investing in very expensive point of sales systems, digital time clocks, and advanced software, only to find that a critical decision MUST be made about the red ink. Difficult human decisions need to be made. Some employees need a raise, others need to be fired. Expensive investment is necessary and some departments need to be closed. It does you no good to have more information, if you don’t do anything with it.

Look at the tape, folks. Hillary is sick. She can’t even walk without two men at her sides. She won’t be ready for a major international confrontation, any more than she was ready to help our people in Benghazi.  She’ll be taking a nap somewhere, behind a protective wall of secret service agents.

NBC and CBS didn’t point that out for you. The citizen blogger, Matt Drudge, did, and another guy on the street, Zdenek Gazda, got it on all on tape for you.

So what are you going to do about it?