Praise the Lord and Pass the Ammunition

The Pledge of Allegiance and Standing for the National Anthem are necessary and wholesome public rituals. We celebrate the house that shelters us, even as we strive to repair and restore it. 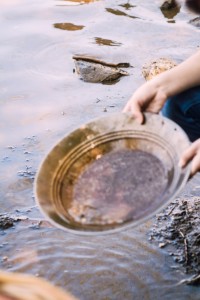 I live in a very beautiful place, with a fair amount of history attached to it, so when I had the opportunity to turn down CBS and the NFL for a commercial shoot yesterday, it felt good. We received a breezy email from the CBS pre-production office outlining their 49ers / NFL promotion as follows:

In 1849 there was a gold rush and people flocked to the west to strike it rich….100 years later, there was another gold rush when air travel enabled football teams to travel and play across the country…. Thanks so much!

They wanted to use our farm, and our living history programs, to add a little Americana gold rush glow (and vintage gravitas) to their contemporary relationship with the NFL. We would provide the gold pans and the sluice box and the bewhiskered prospector, and they would produce a cheery tribute to the American experiment and the NFL.

It took me about five seconds to turn them down flat:

Thanks for the offer, but due to the ridiculous and obscene political grandstanding of Colin Kaepernick, and the NFL’s refusal to discipline him, we prefer to have no association with your organization.

I’m not virtue signaling here. Location shooting fees don’t amount to much. Even Stephen Spielberg only paid us $1500 for a day’s Amistad shoot, so I wasn’t making any great financial sacrifice, nor was I risking my business. No Riley children would go without meals; it just felt good making the life of CBS and the NFL a tad more difficult. If you call yourself the “Columbia” Broadcast System and you represent the “National” Football league, a little respect for our national rituals seems obligatory, for a lot of very good reasons.

Let’s look at the First Amendment for a moment, since so many people seem to flunk basic civics on this one. This is not about censorship. Colin Kaepernick is a highly paid performer in someone else’s private production. He doesn’t have the right to sit out a ceremony, any more than Clark Gable would have the right to change his Gone With the Wind dialogue from “frankly, my dear, I don’t give a damn” to “Gee Whiz, girly, I don’t care.” Trained seals don’t get to skip jumping through their assigned hoops, nor does Colin Kaepernick and his learned colleagues have the right to act out their own lame-brained political theater on someone else’s dime. When tight end Brent Celek of the Philadelpha Eagles struck the Captain Morgan’s Rum pose during prime time, the NFL — very protective of its marketing franchise (if not its patriotic duty) — lowered the boom and promised a “significant penalty” if he tried that again. Sit out the national anthem? No problem. Make a little extra endorsement on the side? Not on your life.

It’s not censorship, libertarians. The NFL is highly staged theater with only one allowed variable — the outcome of an athletic performance. You can’t even wear your own shoes or sport your own medallions on the field. You don’t get to steal the microphone. You don’t get to wear the colors that compliment your complexion. You play football, dude, and you stand for the national anthem. The NFL would be well within its rights to demand conformity to their production, and for the sake of their franchise, and the patriotic Americans who make these folks “Gold Rush” rich, they better get their act together soon.

Is it creepy to require acts of national, patriotic solidarity? Let’s ask a better question: is it creepy to sit them out? If you play for the “National” Football League, if you enjoy the protection of the Constitution, if you are defended by American armed forces, isn’t it more creepy to say you have no stake, whatsoever, in the notion that “all men are created equal?” Is there something about “life, liberty, and the pursuit of happiness” that you find offensive? What country, or what planet, would better suit your preference?

Giving the pledge of allegiance, and standing reverently for the national anthem, does NOT mean you affirm every one of our national sins. It means you won’t break covenant with a republic that allows you to address those sins. You can ponder the words of the national anthem, and then argue with the labor union collectivist over a hot dog and a beer afterwards. Colin Kaepernick and his fellow grid iron intellectuals can march, front row center, at the next Ferguson rally , and perhaps — who knows? — they will find some evidence of police thuggery that eluded even the Obama justice department. But an NFL in possession of its senses would require a display of loyalty to the country we hold dear, and we have every right to wonder, out loud, if non-participation signals enemy status.

What would you think of a husband who took off his wedding ring in front of you during an anniversary celebration? An army colonel who ripped the flag patch from his uniform during a battle? A birthday party boy who refused his own cake? A declaration of solidarity or a common celebration is not an affirmation of perfection. If I blow out the candles on my birthday cake, I’m not declaring every minute of my life worth honoring, or everyone in the room a saint. I’m showing courtesy to our common association. But if I spit on the cake and walk out of the room, by way of protest at a year gone wrong and friends who made a few mistakes, I should be clearly seen as some sort of misfit nut. Failure to give the pledge of allegiance, failure to stand for the anthem, is the spoiled act of a brat at best, and a declaration of war at worst.

A few theologians disagree. (Don’t they live for disagreement?) Joel McDurmon of American Vision actually went so far as to compare Olympian Gabby Douglas’ distracted national anthem posture to August Landmasser’s refusal to give a sieg heil salute, during the height of Adolph Hitler’s power in Germany.

Oh, please, please, please, Joel. We’re not being asked to declare allegiance to a great leader, to a man, but to a flag–and the republic for which it stands, one nation, under God. This is not idolatry. This is not worship. This is not prayer to a national symbol. It’s a simple, joyful declaration of common sentiment and purpose. And, no, R.C. Sproul Jr., the pledge is not an endorsement of our national sins. God gave us all national identities for a Babel-destroying purpose. Praise the Lord and pass the ammunition.

When we listen to the national anthem, when we stand reverently to honor those who have gone before us, we’re not Republicans or Democrats. We’re not a matrix of ethnicities and denominations, walled off into steel cells and conveniently divided for competing demagogues to exploit. We’re simply Americans, remembering Bunker Hill and Normandy and good food on the table and lively ideas debated in a country where the Gestapo doesn’t arrest you at night for saying the wrong thing.

If that public ritual doesn’t stir your heart, you really shouldn’t be here — and hell no, I’m not going to help you make your treason into a television commercial.

When Seeing Might Mean Nothing at All
An Army, not an Audience