Some hip young believers are likely to claim they are “citizens of the world,” and followers of Christ first and grudging citizens of their nations second.

Be on guard against that kind of stupidity. It’s dangerous.

The facts are simple.  Christ put you in a home, in a family,  in a village, in a county, in a state, in a nation. He had a specific piece of geography in mind for you, with a specific language, and a specific set of traditions. His Sovereign Will included your nationality.

The stateless Christian, however, is above all that.  He’s just a simple follower of Christ.  He doesn’t get emotional when he hears ‘God Save the King,’ or ‘God Bless America.’ He is more pure than the rest of us, and he’s generally pretty amiable, so long as his social security disability payment arrives on time.  When he travels abroad, he is likely to note the humble faith, and patience, of the believers he encounters without stopping to realize they need that patience, because they live in tyrannical hell holes.

The Bible is a clear story about nations set against nations for God’s sovereign purposes.  Sometimes He will use a pagan nation to punish a wayward, but chosen people.  Sometimes He sends the Christ child off to Egypt, to a separate land where Herod has no jurisdiction. Sometimes, he consolidates everything under one big failing polytheistic empire like Rome, so that the gospel will eventually have the protection of a powerful sovereign, and then He breaks it all up into separate kingdoms for the safety of His people and the spread of the gospel.  Sometimes He uses flawed men, and flawed empires to conquer pagan tribes in the new world, to end their human sacrifice, so that they might hear the gospel.

Because man is involved, it gets messy, and cruel, and certainly imperfect, but it all happens through nation-states.  When Hitler tried to create a neo-pagan, thousand year “3rd Reich,” a set of predominately Christian nations said, “nope; it’s only going to last a couple of years.” 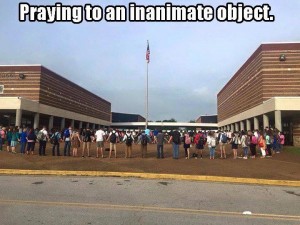 When the stateless believer sees a crowd of young evangelicals gathering around a flag pole, to pray for their nation, he actually accuses them of worshiping an inanimate object.  So if you dare to praise any of the accomplishments of your nation state, be careful. You might be accused of worshiping the government, or depending on the state for your salvation.

Are you an American?  Are you grateful for the sacrifices of the Revolutionary War generation, the hundreds of thousands of men who died to end slavery?  The beardless boys who landed on Omaha Beach?  Does the story of Medal of honor winner Roy Benavidez make you weep?

The stateless Christian, proudly throwing off his nationalism, is too pure for all of that. He likely shares the same critique of our nation’s failings that you do.

But be careful: that’s all he shares with you, a critique of failure. He knows how to lament the weeds, but he doesn’t know how to plant the grapes.  How could he?  He doesn’t call any land his own.