If Pastors Were Personal Trainers 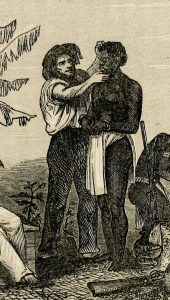 ..we would all be morbidly obese

In the bustling trading town of Middletown, Connecticut, ideas were changing fast. Deacon Joseph Coe, Captain David Coe, Captain Isaac Miller and Mr. Elihu Stone announced they had voluntarily freed five slaves. The event was noteworthy enough to be reported in newspapers across New England, and given the nature of the story, you might be tempted to think this all took place during the Civil War, but this transpired several decades before, on the eve of America’s fight for independence, in February of 1775.

According to the Providence, Rhode Island Gazette, the town’s pastor, Reverend Benedict, “with many other Clergymen in Connecticut, have borne a constant testimony, both in their public and private capacities, against the infamous practice of slave keeping.”

It’s not difficult to imagine the circumstances. Some of the town’s most substantial citizens, (militia captains would be the equivalent of our police chiefs), faced the disapproval, if not wrath, of a pastor bent on changing hearts, minds, and behavior. You can well imagine the sermons, and the challenges across a table in the public house, and the public prayers given on behalf of ending slavery. Eventually the sheep feel the sting of the shepherd’s staff and they get in line. In this case, they made what would be, in today’s terms, a tremendous financial sacrifice.  This isn’t a matter of boycotting the NFL on Sunday.  If, as some contemporary accounts indicate, a slave sold for £40 or 50, and judging money by what it can buy in terms of labor, that would amount to a sacrifice of well over $20,000 each, in 2017 dollars.

Fortunately, in the vast majority of the non Muslim world, we’re beyond selling human beings on the auction block, but one of the primary reasons we take this for granted has to do, very much, with Christian pulpits–with pastors bent on doing more than celebrating unity and seeker-friendliness at any cost. These were pastors who wanted to change the world for Christ, and they didn’t mind bruising spirits on the way.

A few decades ago, I noticed a pattern in most contemporary Christian churches that was simply too difficult to ignore. Briefly put, the world could go to hell.  The sooner the better.  Christ will return any week now, and we can show Him how he took our desire for beer completely away. We can show Him how we gave up a few extra hours making sales, and a few more making mom’s life easier. Our girls can show off their purity rings, and our boys can cultivate tender, Christ-like emotions.

At first, I couldn’t put my finger on why this all felt dismal, and second rate, but in my studies of 18th century New England, I sensed a Christianity that was far more triumphant, far more hopeful, far more celebratory, and far more accountable. When you worshiped with guys who fell in alongside you for militia duty, when you built church meeting houses over a barrel of rum, when you debated policy on the basis of the Bible — then Christianity isn’t some strip-mall hug-fest with a band trying to sound like Cold Play. It’s more like the Kingdom of God, full of men and women who consider themselves adopted into the royal family–and expected to do noble things. There’s a reason that generation brought a mighty king’s army to defeat; they considered themselves crown princes. Their pastors saw them as sons and daughters of the most high God, the Lord of Hosts, the Prince of Peace — and they were going to get the spiritual education, and the buffeting, given to a prince–thank you very much.

Compare that to the sorry series of apologies and vagaries a local pastor gave in a recent message.  At the outset, let me just say I sympathize. I’ve managed enough people, and raised enough children, to know that holding together a coalition, or a congregation, is difficult. It gets particularly difficult when I know that failure will adversely affect my living, and I truly feel sorry for men who need to make their livings from an offering.

But we need to begin considering why Christianity isn’t really changing the culture.  John MacArthur, and other teachers who appear weary of politics, gives us some high-minded sounding advice on this one.  “Convert people to Christ and the culture will change naturally.”

How’s that been working out for us?  With so many stadium revivals, so much Christian broadcasting, so many national days of prayer, why do we live in a world where a twelve year old girl can be taken to an abortionist without her parents’ consent?  Why can NFL millionaire-ingrates make overtly racist appeals for “black lives matter” but a Christian baker can’t even refuse to bake a cake that violates his conscience?  Where are the crown princes of Christianity in the public square?

I’ll tell you where they are:  Cowering behind their pastor, who is cowering behind his pulpit, making excuses for the weakest, shrillest social justice warriors in his congregation. The church, far from being the “called out,” has become “call just about anyone who will come.” Most of these congregations are full of people who truly want to change, to learn, to allow Christ to change them and their communities, but pastors hedge on their sermons to please the young Marxist in the back or the hip anarchist who refuses to vote or the welfare fraud who is on her third husband. At best, everything’s about finding that one lost sheep, and, at worst, it’s just about building market share.

It certainly isn’t about building the kingdom of God, because kingdom-builders have mind, and heart, and muscle and knowledge.  Kingdom builders don’t mind being challenged, told to give up their slaves, told to cry out against abortion, told to “judge righteous judgment.”  Kingdom builders don’t mind being told, “if you vote for pro-abortion politicians, you should not be taking the Lord’s supper.”

On the contrary, the poor local pastor I’m referencing, (it all gets really fudgy around 34:00), while lamenting the “divisiveness” of today’s political and cultural climate, (who doesn’t share that lament?) appears to advocate that the church’s “transcendent,” “other-wordly” posture shouldn’t merely be a place on the continuum between the crazy left and crazy right.  In the search for that transcendence, the pastor offers some concrete advice:  “change the subject.”  Quoting Oliver O’Donnel approvingly, the pastor finds a teaching moment in saying nothing of consequence at all:

Not every wave of political enthusiasm deserves the attention of the church in its liturgy. Judging when political questions merit prophetic commentary requires a cool head and a theological sense of priorities. The worship that the principalities and powers seek to exact from mankind is a kind of feverish excitement. The first business of the church is to refuse them that worship. There are many times – and surely a major Election is one of them – when the most pointed political criticism imaginable is to talk about something else.

Concerned about slavery, Captain Coe?  Let’s talk about something else, shall we?  Are you wondering if a Hillary Clinton presidency will be good or bad for the supreme court and religious liberty? Let’s change the subject.  Can I give you a hug?

There are times when “transcendence” gets so spacey, it just becomes “confusion” or “apathy” or some other sort of gas.

And then, in an attempt to get a tad more specific, the pastor, borrowing a set of resolutions I believe are attributed to John Leeman of GospelCoalition.org.  (There’s that word again “coalition.”)  Among those marvels of “transcendence” is this jewel:

“You who proclaim that all lives matter, who are your friends? Do they all look like you?”

What does that even mean?  We can’t declare a basic gospel truth, (“all lives matter”) without embarking on an affirmative action friend-recruiting campaign?  We only get to criticize the anarchic, racist “black lives matter” movement if we’ve recruited a few black conservative friends to stand with us?  You know what happens to blacks who criticize race-pimping antifa activists?   Take a look. The apostle Paul didn’t legitimize his ministry by making sure every ethnicity was represented on the stage behind him. This sloganeering is nothing more than cheap, topical pandering.  It’s not critically acute, mind and heart changing, gospel preaching.

It certainly is true that transcendent change begins inside the church, that abortion, for example, becomes unthinkable in society when it becomes unthinkable among God’s people.  But poisonous ideas, hammered out of the minds of God’s family, need critical and repeated condemnation under the truly “transcendent” light of scripture. They can’t be reduced to personal virtue bumper stickers, nor will the kingdom of God advance if the congregation has been made to think apathy (and changing the subject) is actually a virtue.

Call yourself a personal trainer and kick their ass.  This generation just might understand that one.