Why Men and Women Shouldn’t Lecture Each Other About Sex

..with free advice to women on the subject of being irresistible

At age 56, having raised six kids, having been married happily to the same woman for 28 years, having endured the 1980s dating scene, (and even a toxic gauntlet of man-killing feminist Stanford coeds),  having come back to Christ, having studied God’s word, I’ve come to this startling conclusion about men and women: 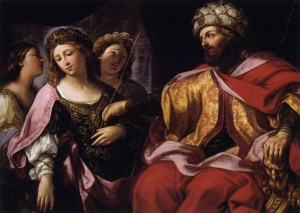 Not only are we different.  We’re so different, it’s a bit of a fool’s errand to expect much in the way of understanding each other’s sexuality.   My twenty-five year old daughter and I had a very civil but pointed exchange about this blog of John Piper on the subject of women’s bodies.

…I’m going to the airport and my eyes are flashing here and there as people walk by. I’m just whispering to the Lord, “God, help me to see women’s eyes.” When I say eyes, I don’t mean the makeup; I mean where the person is. “God, I want to see people, not bodies. Help me.”  Women need to hear — men, too — but women hear: You’re a person. Not a body to be decorated.

Okay, I call BS (short for “Bible Study”) on this.  I respect John as a theologian, but, as my daughter elliptically reminded me, he’s borrowing from feminism here, the awful problem of objectifying women’s bodies.  My daughter probably thinks feminism and biblical interpretation align properly in this instance, but, speaking as a man and as a Christian, I just have to ask:  “what’s wrong with a woman’s body?”

“Well you’re just turning her into a commodity, an object for sexual desire;  she’s more than that.  She’s a person.”

As though we needed to be reminded.  If she really were an object, it would be legal to buy or rent her for an hour or two.  We still have laws against that sort of thing in this country, and even if you could pay for her sexuality, even the most abject whoremonger isn’t just seeking a body; he’s seeking her conversation, her companionship, her soul, in addition to her intimacy.  He’s actually buying the forlorn notion that she wants him. It’s sad, and its sinful, but the notion of “objectification” speaks to the intellectually shallow interpretation of life called feminism.  Feminists sell men short because they don’t understand us — and they don’t want to.

God wasn’t particularly worried about our objectifying Rachel when He told us, in Genesis 29:17, “..Leah had weak eyes, but Rachel had a lovely figure and was beautiful.”

Wait just a second there, Holy Scripture.  You want us to actually compare two different women?   A weak-eyed girl and a girl with a lovely figure?

We read the story of Esther, but we forget it’s a bit of a beauty contest:

“..Let a search be made for beautiful young virgins for the king. .. and let beauty treatments be given to them…Before a young woman’s turn came to go in to King Xerxes, she had to complete twelve months of beauty treatments prescribed for the women, six months with oil of myrrh and six with perfumes and cosmetics…”  (Esther 2)

Esther had the heart of a fighter, to be certain, but is there any possible doubt God is telling us a story about physical beauty as well here, a story that celebrates the power of  a woman’s body?

So what do I do with the dating advice I was given as a teenager?  What about my saintly mother, who advised me, “when you come home from a date, you should only be able to remember the girl from the neck up.”

I remember, as a teenager, thinking my mom was very spiritual about this, and I knew she wanted the best for me, but as a man, I have to wonder, how do you ever expect grandchildren from a “neck-up” relationship?  How do I muster bull strength passion on the basis of a tender, spiritual, meeting of the minds over a cup of tea?  Do I need to make it any more clear?  Women catch.  We pitch.  If you want to raise a lot of ineffective lovers, and childless homes, keep telling Christian young men not to appreciate a woman’s body.

I told you I was going to tell some of you women the secret of being irresistible to a man.  It’s pretty simple.  Try to understand how he sees it.  A woman who is confident in her appearance, who knows she is fun to be with, won’t be threatened by a man glancing, once or twice, at an attractive woman.  When I was dating my wife, we found ourselves one evening at a West LA night spot, out on the courtyard. Two lovers were going at it, in public.  It was tasteless, but, in its own way, it was a little picture of the Garden of Eden.  My wife yelled across the bar, “get a room!”  She didn’t yell, “you’re objectifying that woman!”   She was laughing at her own joke.   She was real.

And I loved her for it.

We were married a year later.

Christianity and the Election of 2016
Hear Me Roar?