The Bread You Eat With Your Mind

I try to start my day in an ancient text.

I scold myself if my mind wanders, because I’m trying to treat it with at least the reverence I give Scottish shortbread.  I’m trying to savor the stuff—even when the words feel dry and tasteless. The point isn’t just to read, but to think, and absorb, to fill my emptiness and vanity with what countless generations have called the mind of God. This is bread you eat with your mind. 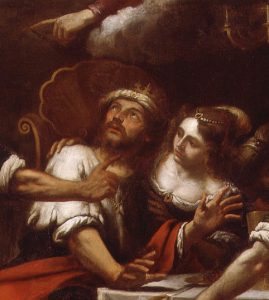 This morning, I re-read the story of a Babylonian king who was celebrating a feast with his wives, his nobles, and his concubines. My mind settles first on the concubines. I see Persian women with blissfully dark, radiant hair and “take me” smiles in so many different flavors of invitation it makes me wonder—I’m a man after all—what a candle-lit world this would be of female friends and lovers. (“The one laughing,” says the king, “with the gold braid in her hair? Arwia, from Nippur. Her eyes glitter when she dances.”) I hear the celebration and I contemplate the savory beef, and the rice, raisins, and bread, and then I hear the sound of that damn, dumb idolatry again. The celebration falls into idol worship, praising “the gods of gold and silver, of bronze, iron, wood and stone.” Gods of bronze?  Really??  Why, Belshazzar? Don’t you remember your pop being turned into a dew-soaked donkey with grass in his mouth for seven years?

A hand of judgment pierces the party. We’re not talking metaphor either.  The king’s face grows pale as he sees other-worldly fingers writing on the wall in the distance, beyond the lamp stand. Wise men can’t read the message, and then they bring in the prophet Daniel, who they should have asked for in the first place. Daniel can read it: the king is finished for allowing this bronze worship. He is slain that night. His kingdom is divided, and Daniel gets a purple robe and a gold necklace.

I wonder, reading this, why we hear so many stories about idolatry in scripture. Could it be we’re slow learners?  Could there be an underlying truth so simple it has to be repeated, over and over and over again? (“Worship the Lord God Only and have no other gods before Him.”)

Then too, I have a theory about anything extracted from the field, or from the ground. We’re anxious to make the earth simple: to turn a field full of wheat and weeds and rocks into a pleasing handful of pure grain. We’re anxious for a wild and ranging vineyard to yield up one clear glass of purple. We light fires, and build forges, to melt rocks, so that a rivulet of pure gold may trickle down into an ingot. We can’t quite believe that mere dirt can yield up anything so pure and brilliantly “elemental.” We seek our own false, and alternative, simplicity and ignore the Final Simplicity of He who made the elemental.

The Babylonian party here certainly celebrated the food and the wine and the concubines, but those weren’t listed among the idols they worshiped. The dolts around the table were praying to silver, when they had good food and company all around them. The finery of the kingdom is not so much the problem as worshiping that finery over its creator. These kings weren’t punished for their empires, but for thinking they had created them on their own. How many great republics today could be held together by humility before the Divine? It’s an extraordinarily simple message: worship God, not things, and certainly not your own contributions.

Then, in the New Testament, I fall upon this passage:

“For after all it is only just for God to repay with affliction those who afflict you, and to give relief to you who are afflicted and to us as well when the Lord Jesus will be revealed from heaven with His mighty angels in flaming fire, dealing out retribution to those who do not know God and to those who do not obey the gospel of our Lord Jesus.”

Afflicted?  God is going to mess with those who mess with you. He will relieve you.  What’s more, He will be revealed “from heaven with His mighty Angels.” The Jesus that 21st century filmmakers endlessly portray in His sandal-wearing simplicity, is also a wrathful King, amid flaming fire, who cares for His people; He will wreak vengeance on those “who do not know God.”

Those who do not know God?

What ties these two stories together? What parallels are there between the Babylonian king’s feast and the advice of Paul to the Thessalonians?  Know God.  Know who He is. Know a little something about the respect, and the love, He demands.  Never put anything before Him.

In practice, day to day, we don’t see the hand of God writing messages on the wall or appearing, with fire, in the heavens, but it’s important to remember, those are “end of the story” realities. That’s the fearsome final judgment for those who got caught worshiping bronze.

Out of Depravity, Christmas
Ways of Being
Ads by Google