A Day Without Sunshine 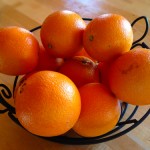 Some years ago, I was on the phone with a woman from Minnesota.  It was a January day in Southern California — a very crisp, cold 58 degrees or so.   I remember how cold it was because it was one of the few days I had the impulse to wear a t-shirt under my starched white cotton business shirt.   It was just an inventory call.  We were in the notions/distribution trade and I was trying to confirm a shipment of scissors.

That was her image of California.   You could open the window and reach out your arm and just pick an orange off a tree.

Now, if you’ve never been to California, I’ll let you in on a little secret:  this is absolutely true.   There are oranges all over the place this time of year.

Just this morning, there was a gentle breeze blowing outside, and I opened the window, only to have several big fat oranges catapulted right onto our bedspread.

“Make sure to put those away,” my wife said.

So I took them downstairs, and the kids had already filled several laundry baskets full of Valencia Oranges, where they stacked them carelessly, five or six baskets high, in the hallway.   I got a late start this morning, and I could see the neighbor kids out on their lawn, building an orange man, and a few other kids, raking up oranges, just so they could run up and stomp on them.   In the distance, I saw my son Samuel catching a big wave, and as the sun caught the iridescent sea glass of the water, you could see it all polka-dotted with little Mandarin oranges, one of the hazards of surfing this time of year.   I made a mental note of all the things I had to do this morning,  and — opa! there they go again  — I noticed three or four beautiful blonde girls, in bikinis, just lounging out in our front yard for the third time this week.

“Don’t you ladies have something to do?” I yelled.

“Dad,” my daughter, Lizzy said, “Mr. Hanks dropped by.  He wants to know if you’re going to the barbecue.”
“Tom? ” I asked.  “Oh, right.   Tom Hanks.  I’ll have to ask your mother. That’s one thing about all these celebrities in the neighborhood — always having parties and asking you over.  It’s hard to keep up with them all.”

So I took a meeting later in the morning, over some beach volleyball, and picked up my Hawaiian shirts from the cleaners, and auditioned for a television show in the afternoon, and then, on my way home there was a massive orange spill from one of the harvesting trucks and I spent an hour or two shoveling a path to my front door, so that there was literally a wall of oranges on either side, (structurally,  not too sound by the way), and, when I finally got into the living room,  there was Tom Hanks again, just hanging out, not lifting a finger to help with the oranges.   It was okay though.  He juiced some oranges and handed me a screwdriver.   Down the hallway, I could hear the Beach Boys working out a new tune.  My wife was out in the back yard, chasing at least a dozen bikini babes over the backyard fence.

It sure beats the real thing.