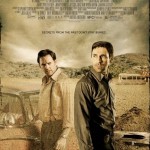 Stolen Lives (2009) If the people who make Hallmark television movies ever decided to spice things up with a lingering, forensic eye on dead bodies and a little Morena Baccarin porch humping, it might look something like this curiously lifeless crime drama, which really should have its own caution tape wrapped around it.  It features a heavy weight set of names:   Jon Hamm, Baccarin, Josh Lucas, Jessica Chastain  and a supporting character cast that will look familiar to everyone, but they can’t seem to bring the disturbing premise to life.   Present day police detective Tom Adkins (Hamm) has lost his son to a kidnapper, and when a fifty year old homicide victim is uncovered at a construction site, Adkins puts the pieces together.   It all feels something like a restaurant with great atmosphere serving up very bland pudding.

This might be a small thing for some folks, but for me it’s becoming  a deal breaker.   You go to the trouble of creating 1958, complete with cars, wardrobe, diners, and funky gasoline pumping stations, only to learn that no one can bring themselves to put their foot down on the right haircuts?    Jimmy Bennett, playing the part of the simpleton problem child, looks like someone out of the Partridge Family, season 3.   It just seems like someone should have examined the frame and screamed “you’re getting 1974 all over my 1958!”   I saw some of this in the high dollar television series, Pan Am, where it seemed plainly evident:  some of the stars couldn’t quite bring themselves to go 1964 all the way.   It’s usually the guys too.

By the way, I like to review films and television, but I also know how difficult it is to do it all right.  It’s an extraordinarily difficult genre to master.   I’m not saying it’s easy, and I’m pretty certain Roger Ebert would never have been able to make a film worth watching.

A Day Without Sunshine
The Israel of God