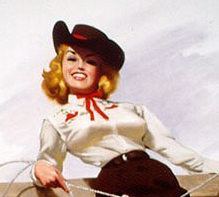 Somewhere, out on the prairie, a weary, broad-shouldered rancher settles down on a log by the fire.   His wife is nearby.   She’s gorgeous. She wears cowgirl denim and a blouse tight enough to reveal the Almighty’s blessings  without causing pandemonium amongst the hired hands.   She slides down onto her husband’s lap, two beers in hand. They toast each other and the quiet lullaby of their eldest daughter singing the other children to sleep in the distance.    Just to their right, around the campfire, a shaggy trapper enjoys a pipe, his arm around his wife, who happily summarizes a new business scheme for the assembly, or just for herself;  it’s hard to tell.   On the far end of the fire, a square-jawed man with epic, Buffalo Bill facial hair, cleans a pistol, drinks whiskey, and flirts with his wife.

That last one is the pastor.

Okay, that’s fiction — or a rosy mythology of some sort.  Call it Cowboy Calvinist Camelot.  It expresses something fearfully missing from modern, conservative evangelical life.   I might call the missing ingredient many things — romance, grit, authenticity, courage, but just so that I don’t miss anything, I’m going to go broad and call it ‘truth.’  We aren’t true to ourselves, our nature, and our God, and we certainly aren’t true to His word, and it’s not because our intentions aren’t pure.  If anything, they might be too pure.

Several years ago I knew a family in trouble.  They had several children.  They were homeschoolers, but everything seemed to be going wrong:  mom and dad were fighting;  they were in a protracted scrap with the neighbors that was threatening to take a turn in the county agency direction;  dad was beginning to binge drink;  mom was shouting at everyone all the time, and nagging and lecturing in a way that never got any results.   She had become a kind of faulty human smoke alarm you just unplugged and ignored.

They decided it was time for some drastic steps, so they enrolled in Bill Gothard’s Institute in Basic Life Principles.   I took a look at some of the “Wisdom Booklets” the ministry published, and my first impression was: well-intentioned, but weird.    Each of the books, as I recall, used an animal to embody a vice or a virtue being taught.

There was a pamphlet on anger, for example.   The advice seemed to be this:  A Christian never gets angry.   While no one would call a hair-trigger temper a virtue, you simply can’t read the Bible without encountering righteous men giving vent to righteous anger. Moses isn’t exactly a pussy-cat with the children of Israel, and there’s a reason they call a livid condemnation a  “Jeremiad.”   Reducing complex Biblical truths to merit badge booklets, and charging admission for the “instruction,” makes me a little nauseous, especially when the desired results paint a picture of anemic lifelessness — obedience to leaders, over obedience to conscience.  The Wisdom Booklets felt both painfully obvious and parochial at the same time, and I had a hard time believing people fell for this.

But they did.  Bill Gothard collected enough ministry money to fly around the world  in a Lear Jet.   He filled huge conference halls, and he enjoyed the patronage of politicians and ministry leaders.  Certainly, (and this is the galling reality for those of us who believe in the dominion Kingdom of Christ), much of what he taught was true, and now that all gets called into question, because he’s accused, frankly, of being a disgusting pervert — of luring teenage girls into his ministry so that he could fondle them, and so that his brother Steve could bang the help.    This week, he stepped down from his “ministry,” but — if we are to believe the reports — it has taken more than 30 years to bring him to any sort of justice.

My humble sense of things?   Bill’s version of “holiness” had a great deal to do with his downfall.   He saw himself as capable of some sort of Pauline celibacy, and, if the stories of dozens of women are any evidence, this plainly seems at odds with the reality.   He wrote that good Christian families should not own television sets, that “..men should note that facial hair tends to obscure the countenance..”  and that having good music in the home can help an infertile couple conceive — thus violating a well known principle of Biblical exegesis — the nuttier it sounds, the more texts you better produce.

Unfortunately, the Bill Gothard story is emblematic of a broader neo-pietist problem:  some folks believe you get to heaven by staying quiet and keeping your head down.  God will notice us if we don’t have any TV sets, rock music, or facial hair.

While I’m quite certain most in the Nazarene, Gothard, Vision Forum continuum would disagree, mightily, with that statement, and would forcefully articulate the doctrine of grace, in practice, you won’t find many of them around the campfire at the Cowboy Camelot.   A pastor who drinks whiskey?  An elder in the church whose wife looks downright sexy?   A woman talking about business ideas with the men?

And is that pork you’re eating?   Our fellowship is going raw fruits and vegetables only this week.  All the women in my family have covenanted to grow our hair long and wear a covering in public.   My older sister, Clara, has just entered into covenant courtship with a young man from my uncle’s fellowship, and they have agreed not to touch until they are united at the altar.

It doesn’t matter what the extra-Biblical holiness obsession is — and many of them can be entirely wholesome — people aren’t stupid.   They know — no matter how much you swear to the contrary — that you are claiming to live a higher standard than they are.   “I will pray for you, sister.  You just gave your husband a beer, and I pray God will deliver you from that.”

Scripture is pretty clear that you can err in both directions — you can ignore God’s moral law, or you can add to it.   Many of the folks who were attracted to Bill Gothard’s rigid false-orthodoxy were reacting to a divorce culture, a violence culture, a spiritually dead music culture, and that’s completely understood, but on your way back to God, you can buy into a ministry’s “franchise” as well.  For the price of admission, or even just for warming the pews, you can  buy their version of “Jesus PLUS.”

And, anyway, this Bill Gothard guy arrives in a lear jet, with lots of secretaries.   You get a certificate for being in the program too…