Picture the children of Israel marching closer to the promised land, and they encounter some really vile Canaanites.  I’m talking real cannibals here.  They are covered with greasy soot, caked on their faces by the burning of their own children in altars kept smouldering to Molech.  They smell of gore and greed, and their spears are wet with human blood.

To face these monsters, the children of Israel pull back a tent curtain and reveal two clean cut middle aged guys in Baptist business suits. They look like Gary Bauer and Mike Huckabee. 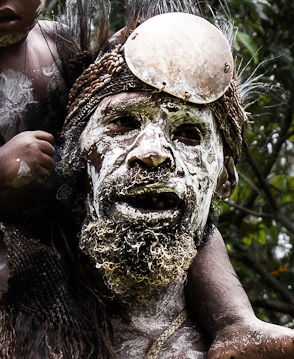 Gary and Mike step forward assuring the Canaanites how much they love them.  The Canaanite medicine man, a sodomite prostitute, keeps yelling to his people, “these two hate us!  They call us sinners! They are bigots.”  Gary and Mike disagree.  “Hatemongers,” the pagan priest says, “they detest our ways.”  Gary and Mike keep smiling and assuring the pagan priest they have nothing but the best of intentions.  “Prove it,” yells the Pagan priest.  “Give us 10 of your your young men that we might teach them the ways of Molech!”

This pointless conversation goes on like this for several years, for so long that everyone gets tired of it, but the pagan priest has been yelling “hate” for so long that everyone, weirdly enough, starts believing it.  There’s a general consensus: pagan child-burning sodomite priests are just sort of our neighbors in this pluralistic promised land and maybe we just need a uniting hashtag of some sort.  #lovewins?

Clean cut culture warriors, carrying zippered Bible bags are not a problem, so long as they are carrying guns — and the rhetoric of real men.  We’ve fighting this battle too nicely for too long.  During the proposition 8 battle, one gay activist, knowing I was a farmer, proposed killing me by stuffing  apples up a part of my anatomy that seems central to their understanding of life.  You can block such people, but you better load up on the ammunition too.

When you are facing that kind of savagery, it’s time to change the tactics folks, and your theology.  If you really believe that God the Father wants His will done in heaven and on earth, (you do believe that prayer?  Right?) then you have to change your doctrine a tad. You need a little more reformed, historical Christianity and a little less checked-out dispensationalism.  The fact is:  Christians know better.  Our standards for governance are higher.  Our law is better than that of pagans.  We need to argue for it, vigorously, for their good, and our own.

Our Book — His Book — is the guide for civil life in this, or any, republic.

But we’ve lost, you say, and we’re losing.  I don’t disagree with you. The last 100 years of the church have been characterized by a gross retreat into the chapel ghetto.  We have become too polite, too docile, and too insecure.  We bow before science, when we should be mastering it.  We shun the arts, when we should be the best filmmakers in the world, and when we fight, we don’t get mean and ugly.  We don’t braid the whip, or sell our cloaks to buy swords.

The next round of the “gay” marriage debate may take many forms, but it’s likely the new right to “dignity” will collide with the old right to freedom of conscience.   If a gay couple demands to be married in a Calvary Chapel, and they threaten a lawsuit, how will the church respond?  If your Sunday School curriculum includes New Testament morality and the child of “gay” parents claims emotional abuse, will you settle out of court?

I advocate the “Church Bellicose” approach.  Christians need to begin saying, with real intent, “we will teach our children New Testament morality, and that will include the ridicule and the scorning of homosexual behavior, and if you interfere, we will litigate you into the ground.  Your businesses will be boycotted. Your public schools will be de-funded.  Your reputations will be ruined, because this is my Father’s House and you have made it into a den of thieves.”

Long Live Shame
How much, baby, do we really need?