How much, baby, do we really need?

So sue me — a Monkees tune can make me fight back the tears..

I had good cause.  I was driving home after dropping off my 19 year old son, Samuel, at the airport.   My fourteen year old son was navigating for me, and setting my old-guy play list to auto-shuffle, and — oh this  is ridiculous — there is no reason to get emotional, hearing Davy Jones croon, “wake up, sleepy Jean” and comparing himself to a “white knight on a steed.”  Davy Jones? 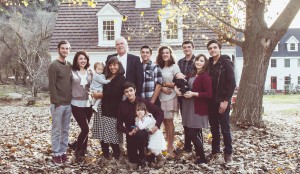 It should have made me chuckle, but it yanked me back to 1967, when the notion of being a dad, let alone being a granddad, was a pretty remote fiction.  What I understood then was that there was some big promise of love in the air, some girl who would wake up next to you, happy to share your poverty, and your dreams.

I got that. It happened. The girl gave me six beautiful children.  And then, as though everything that happened inbetween was just an epic film on fast forward, you are standing there, and he’s nineteen.  Your daughter is crying saying goodbye to him, and so is your “Jean” and you have to walk away, just to keep it together.

When they’re small, we think of them as our own creation.  We govern their time, and many of their choices.  We actually get nervous, and cranky, when they start to chart out some territory of their own.  Have they thought that all through?  Why do they want to spend the summer in Ohio?  Why do two of them want to go off to Ireland for the summer?

..and then you think, “hey, it’s not a bad plan.”  You cross over from cranky to reconciled to happy for them.   You might even be a little jealous.

..And you realize they were God’s all along..

The Church Bellicose
Written on the Heart
Ads by Google