It’s been a bone-weary two weeks.  I performed Patrick Henry five straight nights last week, and four straight nights this week.  We had a county water well inspection this week, several meetings about the farm estate, and I signed my own will and trust papers, (a strange, ponderous stack of documents and decisions indeed.)

To top it all off, a few days ago, I opened my email inbox to read these words from a reporter named Elysse James: “I’m writing an article .. regarding an alleged racism incident at a school field trip out to your farm.”

It doesn’t matter, of course, that the “story” is based on falsehoods, inflammatory descriptions,  and someone’s interpersonal beefs with their child’s school.  It doesn’t matter that millions of people have visited your living history programs, with high praise for decades. What matters is that someone is willing to make ugly accusations about your actions, and your intent.  They don’t care about the collateral damage.

In the life’s-a-bitch lottery, you have just been handed a card that reads: “have a nice evening; enjoy your own personal storm cloud.” 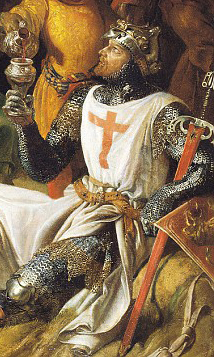 Okay, that was a few days ago, and since then, prayers have been offered up for our family and our enemy, the story has been revealed for the nonsense it is, our attorneys have been given the defamation data, our guests have come to our defense, sales have gone up, and we’re prepared to fight back as hard as justice demands, but I wanted to use this occasion to talk about the wisdom of King Solomon, and the God who inspired him.

It’s just this: there’s a time for everything, folks.

Love and hate.  Peace and war. Planting and harvesting.  Embracing and.. just, well, folding your arms and frowning.

If I have one problem with this age of the church, and this time in our culture, it is this:  God can’t be contained by a bumper sticker or even your favorite verse.  He’s the God of all things, and all truth.

Different problems call for different responses.   When someone sees me wounded, unjustly, and they say, “Love your enemies, bless them that curse you,” I thank them for their winning entry in the Captain Obvious contest, but I also respond:  “having done that, how do I serve the God who commended, “let justice roll on like a river?”  (Amos 5:24)

I know all the types of “single dimension” responders: the “mercy mother” who has enabled her children right into the penitentiary and the condemning father who has alienated all of his sons with his own cold version of Baptist rage.   I once knew a woman who thought the most important role of her parenthood would be getting her teenage daughters on birth control, and who — if probed — would have absolutely no idea what to say about the moral and spiritual dimensions of sexuality.  I know people — present case in particular — who think children should be shielded from anything even remotely painful.  Recently, I encountered a believer who wouldn’t let his teenage children watch “The Passion,” on the theory it was too violent.

The Bible is a BIG book, folks.  It’s complicated.  I’m reading a passage in 1st Kings now, where David, giving advice to his son, Solomon, the next king, and he admits he had shown mercy on Shimei, even when he called down curses on David. You might be tempted to think David was about to extend that mercy, but the old king tells his son: “..Bring his gray head down to the grave in blood.” (1 Kings 2:8)

I’m not even sure if David was right — by God — on this.  I do know that if you live your life by only half of what Jesus commanded, you run the risk of being half a believer.

Are you tempted to destroy your neighbor solely on the basis of what Jesus did with the money-changers?  Are you tempted to allow a savage Muslim have his way with your daughters on the grounds that we need to “love our enemies.”

Grow up.  Read, pray, and take counsel.  God isn’t calling idiots into the kingdom who wish to remain idiots.

Mocking The Meal
Lands and Titles..
Ads by Google