If He Steals Your Coat, Give Him Your Wife?

Was Jesus Looking For Pansies? 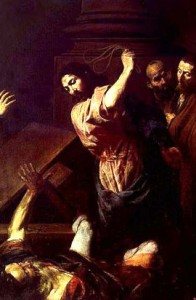 I had a spirited discussion with a pro-life activist yesterday over an incident that took place outside of a clinic recently.   A very angry post-abortive father responded to the sidewalk counselors by breaking one of their cameras, hitting one of them in the face, and chasing the remaining counselor down the street.   At one point, the outraged man warned the pro-lifers they were lucky he didn’t have his pistol with him.  The video of the incident was preserved on another camera, no one was seriously injured, and charges are being filed against the assailant.

But here’s what gave me pause:

[The victims] later pressed charges against their attacker. Police have characterized the incident as “assault and battery,” and criminal “vandalism.” ..The men never defended themselves when assaulted. “We turned the other cheek,” he stated. “We didn’t strike back. We didn’t hit back. We didn’t call names. I even thought twice about whether to press charges or not.”

My children have been involved, for two years now, in pro-life ministry and I have made it very clear they should be ready to defend themselves, if necessary.   No one should be intimidated from expressing their views on a public sidewalk, and I’ve personally witnessed many a woman change her mind about killing her unborn child because of the presence of sidewalk counselors.    But should a sidewalk counselor stand passively by while a raging lunatic destroys his property and threatens his life?   Absolutely not.   And I’ll go further:  there is nothing “Christian” about cowardice.

To be clear at the outset:  I don’t think Christians should go looking for trouble, and in the vast majority of the cases, a simple, visible camcorder will prevent most people from losing their minds in public. Personally, I believe pro-life ministries should arrive in significant numbers, stay together in groups, and notify local law enforcement of their presence.  They should also have some big, rough-looking dudes with them at all times.

But, as this incident makes clear, there will always be the stray, feral dog who can’t abide being told he’s in the wrong.   I’ve seen enough of these people to strongly suspect there is a very dark spirituality at work in them.   They rage like demons when confronted, and if they can kill their own child without hesitation, you can only imagine what they would be willing to do to you.  Bottom line:  restrain them, have them arrested, press charges.  Be ready to hit back hard and fast if you have to. The life of a believer, in the dominion kingdom of Christ, is far more valuable than a raging child of the devil like this.

But what would Jesus do?  Wouldn’t He turn the other cheek? Wouldn’t He feed and love His enemies?

When people quote these references to the Sermon on the Mount, (Matthew 5-7), I’m always surprised they haven’t cut off their hands and gouged out their eyes as well.   I’m surprised they haven’t allowed themselves to be stoned for adultery, since I’m willing to wager at some point in the last two weeks, they may have looked upon a woman with something like desire.

In the 5th chapter of Matthew Jesus articulated a standard of behavior so unbearably high he concluded it with these words:  “Be ye therefore perfect even as your Father which is in heaven is perfect.”

Got it?  Be PERFECT.  Be as perfect as God in Heaven. How’s that working out for ya?

Have you found yourself coveting something?   Why haven’t you cut out your eyes?  Has your hand spent too much time on video games and too little time opening the Bible? Why haven’t you cut it off?   Have you made absolutely sure you are at peace with every man before writing out your tithing check?   Then what are you doing in church, you hypocrite?  Are you buying insurance to protect yourself from lawsuits? Why?  You should just give it all away whenever someone takes you to law.   Have you called someone a fool?  Get ready for hell fire.

Jesus was saying, in short, we have to be a lot better than the Pharisees to enter the Kingdom of Heaven.  Get this:  We have to be as perfect as God. Now, I’m not a theologian, but I’m just guessing Jesus wanted us to think that one through.   I’m guessing he was waiting for one of us to say, “hey, wait!   I can’t.”

Bingo.   Jesus was engaging in hyperbole, exaggeration, or perhaps just the cold, hard, awful truth:  God is so holy we can’t get anywhere near him unless Someone strips us of all our sin. So when Jesus was saying “turn the other cheek,” He was comparing our impossibly weak human mercy to God’s infinite mercy.  We get slapped on the cheek and we  burn for justice.   God watched His chosen people burn their children in brass altars, and He waited for justice.

We’re not capable of  that kind of patience.  The fallen world needs justice, or it completely implodes.   The Romans 13 ruler, and by extension all of us in representative democracies, need to be a scourge unto those who do evil, or evil will flourish. Hang your head and thank God for His mercy,  because you’ll never be that merciful, and you will never be capable of dying for all men’s sins.  You aren’t the perfect lamb of God, so get over it.  That price has already been paid.

On this earth, in this life, do what Jesus did:  He braided the whip, and proved Himself a holy terror to those who do evil.

Buy a sword, better yet a gun.

That’s what a real Christian would do.

Abortion, Jesus, Pro-Life, Self Defense, Sermon on the Mount, Turn the Other Cheek

The Course Guide of the Universe
The Riddle on the Mount