To the makers of the Fleetwood “Jamboree Sport” recreational vehicle:

I’ve debated how to begin this diplomatically, but perhaps I should just ask the question straight out of the gate and be done with it.

What did I ever do to you? 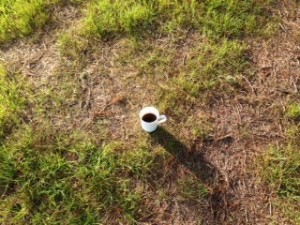 I don’t believe we’ve even been properly introduced. Yes, years and years ago, my wife actually worked for Fleetwood as a young staff accountant, but her job reviews were always stellar, and the only thing that kept her from staying on with the company were the demands of motherhood. She has always spoken very highly of your organization, and, try as I may, I can’t possibly think why you would have any reason to put our family through the ordeal of the last 36 hours.

Yes, this little “Jamboree Sport” sure looked good at the rental yard. Plush looking upholstery, big comfortable (looking) bucket seats, a cozy little kitchenette, a bathroom, shower, and a separate “master bedroom.” It gave every promise of being a luxury condo on the move. As you may know, I don’t even like the idea of a “public RV campground,” and I’m totally with you on the comforts of home thing. I planned on staying inside. Why parking a rig like this next to hundreds of other rigs like this constitutes “getting back to nature” is something I never grasped. The nature trails, with those little signs written by staff ecologists who appear miffed you’re even here — well I get enough disrespect in life without getting it as a bonus with my parking space fee. (I know you’re not the State of California, but I just want to make it plain that I think my part in reducing the bull seal population is only minimal.) I prefer the faux environmentalism of the Four Seasons hotel, asking if you want to forego new linens every night to the snarling hostility of park service lesbians, who can’t deign to look up from their invasive weed removal, long enough to give you a “one more member of the public” frown. No — RV parks will not have a place in my version of heaven.

I may be in a bad mood because your passenger seat is not designed for anyone over three feet, six inches tall. The “recline” position appears to lock in right at about 90 degrees, and if you actually make the mistake of playing with the adjustment lever, you might spend most of the drive hunched slightly forward. Behind the passenger seat, there is an homage to the RV tradition of wrapping up five features in what appears to be the kitchen table, (you know the kind that doubles for bed, love seat, bike rack, pantry, green house, depending on your mood), and that’s all really great, except that I had to sit at 80 degrees, forward position, or risk the wrath of a teenager who would have endured a similar fate if I “reclined.”

But I am generally a forgiving person and there was something to be said for the campground. It looked out on a magnificent stretch of the California coastline. You could almost imagine William Randolph Hearst’s DC3 flying in for a wine tasting. Beautiful. All went pretty well until nature called and I remembered, a tad optimistically in retrospect, that we had our own bathroom. No need to use that smelly, state park, open pit down the road.

Well, of course. I breezed on over to our Jamboree Sport, bounded up the steps, and I noticed something disturbing: there was a spray nozzle on the floor next to the toilet. A spray nozzle next to the toilet? The toilet, moreover, has no standing water — just a plastic retracting eyelid. You start to put these realities together, and there’s a part of you that wonders whether this really is a toilet. Is it possible that you might have to explain that you took a poop in something that was NOT a toilet? “Mary?” you yell to your wife, “is this a toilet?”

“Yes,” she says, anticipating my dilemma, “that’s what the little spray rig is for!”

“Well, that explains everything,” I thought, but I was still not comfortable with the idea of what I would call a two stage process. I don’t like long goodbyes by nature, and the idea of using a pressure washer to say goodbye to nature,  it just seemed, well, cramped to begin with.  This little water closet was something like a game of twister.  There was a big roll of hand towels on the counter but I couldn’t see the toilet paper anywhere.  And then I pondered the spray nozzle again.   No.  Impossible.  With a sigh of relief I caught a glimpse of the toilet paper in my peripheral vision, and with a  contortion that only marginally strained my lower back, I was able to reach it.

I felt a certain measure of pride in my first bowel movement in your C class motor home, but then I was told by my wife that the bathroom was really only for emergencies.   Otherwise, you had to go empty the tank all the time and everyone was just going to use the state park bathroom down the road.  Obviously, I had committed some sort of major RV faux pas, and the family looked at me with deep disappointment.  How could I have done this?   Used the bathroom in the RV with a bathroom in it?

No one does that.

Now, as to sleeping, Fleetwood, I am tall, but it’s not as though I am Yoa Ming, and yet my  feet literally hang off the end of the bed.   I’m not talking about a few toes edging just out over the lip, but the edge of your matress actually digs a rut into the side of my calves.   You have done what has not happened once in twenty six years of marriage:  you inspired a conversation about where we might sleep separately.  Thanks for keeping couples together, Fleetwood.

And, listen, no one gets on a bed from the end.  I get that.  But you, knowing that, included FOUR INCH AISLES along the sides of the  mattress.  There’s no turning around once you’re committed in a single direction, as your knees literally cannot pass each other and your wife laughs at you, resentfully, (because she’s tired) as you try to get into and out of the bed, from the side, which, I repeat, cannot be done.

It’s probably my fault, for thinking it would be easy — but Fleetwood, those brochures, those pictures of the cozy little nook in the woods.

You never really told us how cozy it would be…