Did you say Class A? 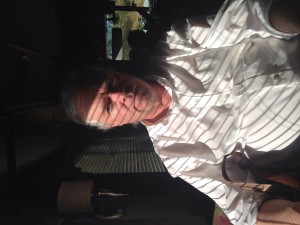 You’ll have to pardon me if my thoughts appear, in this narrative, even more disjointed, and fissured by mental stress-magma than normal. I’ve been through a horrible experience, the sort of thing I wouldn’t wish on anyone.

I’m on the annual RV camping trip with the family.

Most people love this sort of thing.  I hate it.  I’ve always hated it.  Since I was a small child, the thought of crossing the desert for hours, breathing in the late afternoon, stale banana air of a camper kitchen has always filled me with dread.

“We all have to get over our childhood traumas,” my wife tells me, at the helm of a big Class A Fleetwood Bounder.

“I don’t want to get over this,” I tell her, stumbling through the coach at sixty miles an hour in search of a propane leak.  “Do you smell that?” I ask the teenagers, and when they begin nodding I yell: “Everyone.  Open the windows.”

I camp with these people because I love them, and for some strange reason they love this sort of camping, and they are willing to put up with me on these ventures.  This is all very humiliating because for many years now, I’ve told people that if you really want to understand applied theology, (as opposed to theoretical, Sunday theology), go camping with them.  I’m afraid this must have been some sort of mental projection on my part, because you don’t want to go camping with me.  I’m precisely the sort of Israelite who would be complaining about the melon and honey shortage.  “Jim Riley?” Moses says, running a hand through his silver hair, “don’t even get me started.”

I do think, however, there is something universal in the human spirit that rejects RV camping, even if most of America has succumbed to the industry’s shamelessly sexy and misleading advertising.  With that in mind, I proceed to my 2nd annual diatribe against “recreational” vehicle camping.

The Sheer Size of These Monsters

Generally, I like scale. Big cathedrals. Huge ocean liners.  Bigger trucks on the highway.  I see it all as a sign of progress.  But I like scale when other people are responsible for it.  I can’t get over the size of these “Class A” tanks.  I’m having memories now of trying to push a 40 foot long beast, appropriately named a “ROCKwood” up the Halloran Springs grade outside of Las Vegas.  The poor creature, loaded down with 10 Rileys — their camping tables, their cast iron cooking gear, their warehouse loads of cashews, bulk water, canned niblets — literally slowed to a 12 mile per hour pace on the interstate.  You could lean on the accelerator but there was just no more to be had, and you always had the feeling hot steam, (or burning engine oil) would soon be pouring out of the hood, and into the cab.  It was the kind of driving experience that made you wonder if you had a working fire extinguisher at hand.

And then when you crested the summit, and began your way down the grade, an entirely different sort of dread crept over the  caring campers: raw, rolling-boulder acceleration.  It was the sort of speed that had people in the back of the coach saying things like, “uh, you better..”

“I know,” you respond, “I’m trying not to ride the brakes.”
“Downshift.”
“I’m trying.”
“Slow it down.  You know you can ride the brakes too much on these things and you lose them.”
“I know, ” you whisper to yourself, “thank you. I know.”
“Mom, where are the Starbursts?”
“She doesn’t have time for that right now, Samuel.”

Or you could get the double, whammy — speed and a curve.  It’s the sort of unpleasant, big coach, centrifugal lurch that makes you feel as though you are about to be launched out over the canyon.  Just when the coach seems be sitting back over its axle, you get stretched diagonally, in the opposite direction.  And then again in the  opposite direction, and then you see the traffic sign that warns, pleasantly:  “Steep Grade, Curves, next 12 miles.”

And that’s to say nothing at all about that fearful twist in the life of a motorist who doesn’t drive a school bus, or a 53 foot trailer rig for a living: actually maneuvering these big elephants down city streets and into gas stations that have no space for you.

And then all this driving occurs while several teenagers and small children are actually chumming it up in the back, playing games, sharing snacks, shouting as though someone up front in the cab were not concentrating on every single rattle of danger one mile fore and aft. The grossly assymetric nature of this “dread and worry” up front and  “let’s party” in the back, by itself, is a source of tension.

“Hey!” you yell, “this is difficult stuff up here and when you scream like that..”
But you can’t finish the sentence because someone screams.

Even when you’re out on the straight, flat endless highway you aren’t safe from the stacatto clatter of a wooden spoon beat, drum style, by your sister-in-law, Benita, who fears the driver is falling asleep and is so afraid she can’t actually speak.  Your life flashes before your eyes.  You regain your composure, take  a breath, and say, “no, we’re good.  We’re awake. ”  But then it occurs to you the driver might actually be on the verge of sleep and you spend the next 30 minutes in an exchange like this:

So, anyway, we always make sure to bring a lot of alcohol on these trips, because by the time you arrive at your destination, having destroyed a few more camp signs along the way, you now face the prospect of having to break a posted camp rule:  “No holding spots for other campers.”  The rest of your group hasn’t arrived, and you want three spots together, right, because what was the point of this whole togetherness thing in the first place, if you are going to be strewn out across the campground, so that your grandkids have to wander through a camp of aging feminists in tye-died t-shirts with a sign that reads “no men” on its permiter?  (This actually happened, not this trip, but on another and  it got me thinking about all the savory sorts of people you could actually meet in a public campground.)

So, glass of wine in your hand, you feel totally justified asking your 25 year old daughter, with two children in her arms, to set up a tent and claim the extra spot.

“Chop, chop,” you actually say..  (and regret it almost immediately).

In the next installment, what the state park system calls a “vault toilet.”