An Ongoing Blight on our Beautiful Land 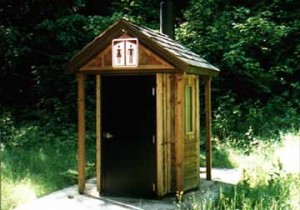 “Vault” as a verb is defined as “leaping vigorously.”  As a noun, it can also be understood as “burial chamber.”

Anyway you look at it, if you hear someone say a campground features “vault toilets,” start leaping vigorously in the other direction.  Start talking about the virtues of a golf or tennis vacation. Just about any wilderness experience is better than having to use a vault toilet.  Crapping in the woods and using oak dock to wipe your butt would be like the Four Seasons compared to using a “vault toilet.”

My first adult memory of a “vault toilet,” (fairly sure any childhood memory of such a thing was wiped clean by trauma) was on a trip through Colorado when we had four children under seven. I was assigned poop duty for one of the boys, and when I looked down into the toilet (which looked deceptively clean and sanitary and structurally sound), I was astounded to see what looked like a 12 foot drop.  Fathomlessly deep poop, flies, and urine.  A literal dungeon pond of floating crap.

Could you design a better hell on earth?

But the thing that terrified me the most about the concept of a “vault toilet” was the knowledge that a child could actually fall through that hole.  My son, Nicholas, actually looked a little curious about the contraption, and I found myself outraged that the UNITED STATES FOREST SERVICE actually got away with this sort of thing. I have some experience dealing with government agencies on the subject of restroom facilities open to the public, and no one without sovereign immunity and monopoly access to the White River National Forest could get away with asking the public to use a “vault toilet.”  These things are war crimes.  It’s Jim Crow on a federal level, where we all qualify as former, (or current?) slaves and some regional bureaucrat just decides:  “dig a hole for them.”

Okay, that’s a bit hyperbolic, but not by much.

But the absurd thing about paying $1200 for a luxury, class A “recreational” vehicle is that you are expected NOT TO POOP IN THEM.

Did you say Class A?
Axioms For Breakfast
Ads by Google