Not everyone who has a beef with Pharaoh winds up in the promised land.  A dreadful number of them find themselves in a compound somewhere, re-stringing the pastor’s electric guitar or juicing organic wheat grass and obsessing over flavorless casseroles for the fellowship potluck. Some of the moms get packed into shapeless denim dresses– sexless, “holy,” and three degrees shy of Islamic. Purity rings are prayed over.  Obedience merit badges are embroidered. Check lists are checked. 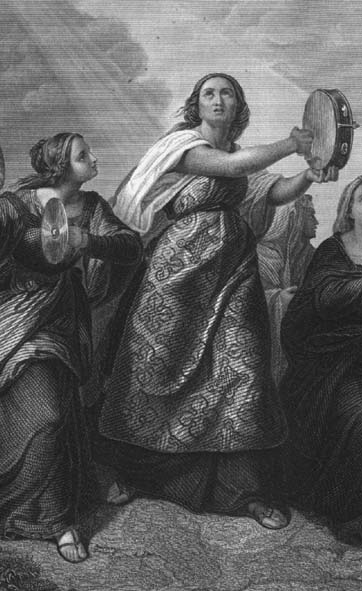 These are the folks who never make  it out of Goshen, much less across the Red Sea.  Some never get to watch that big  party where Miriam picks up a timbrel and leads the ladies in a dance-fest to the glory of God and His victory over all those dead,  drowned Egyptian thugs.

The devil really is a crafty bastard.  He can take a real beef with Pharaoh  — your child, say, punished for praying before a test in public school — and he can tempt you into following a false Moses, into a legalistic nightmare of cult-like devotion to the approved ministry leadership, and the approved theological fads. Well meaning believers, exiting public education and looking for guidance, sign up for Bill Gothard’s  book and tape ministry, only to find that his hyper-pietism doesn’t even work in his own life, (he fondles the help).     Some of this gets even more ugly, (consider “I Escaped a Cult” on Netflix, for example), but most of it is just a gentle, culture-corroding rash.  It’s the same old bondage in Goshen, but with a right-minded sort of leader, who keeps promising freedom without delivering it.

Early on in our married life, we ran from the tyranny of pharaoh and into the sanity of homeschooling and house church.  We decided we would home school when it was apparent there was no real cultural consensus of any sort in the public school system. Unlike my own childhood, when Baptists, Catholics, Mormons, Jews, and atheists all rehearsed “Joy to the World” for the Christmas program, the public school system in the early 1990s appeared hell bent on offending the majority culture and catering to the minority: the agnostic, the atheist, and the downright irreverent.

In the process of leaving Goshen, however, we found several leaders claiming Moses status.   I didn’t trust most of them.  Bill Gothard had a bit of good advice, here and there, but  his wisdom booklets seemed highly idiosyncratic, to put it mildly, and when a local family was asked to meet his dress code, I sniffed major weirdness in the air.

Conventions about piety, parenting, and orthodoxy float like smoke through the camp of the exiled, and at various times, we were exposed to a number of them that drifted across our park days, bible studies, and potlucks without a lot of debate.  Some were downright nutty, and easy to dismiss.  Others had the whiff of holiness about them, even if they wouldn’t stand up to scrutiny. Others were actually biblical.  Take your pick:  Women should wear head scarves to show their submission.  Girls should never own a gun. Boys and girls should never talk to each other, unless they were all assembled in a large group.  Couples should never touch until they are wed at the altar. Large families are a blessing to be sought–after you are about 38 and have total financial independence.  Birthday parties, and Christmas celebrations are un-biblical, and should be avoided. Fathers should be the final authority in their homes.  Unmarried daughters should be content to remain at home, even until their early 30s.  Alcohol of any sort is so inappropriate we shouldn’t even need to say so.  Good art means there will be no “unpleasantness” or swear words.  Anything short of the King James Version of the bible is an attempt to undermine the gospel.  There are definite strict standards for female modesty, but we’re having trouble defining them, so go overboard if you have to. Television and movies are inevitable, but you are super holy if you don’t watch them at all.  Courtship is difficult to define precisely, but if you fall short of our definition, you are being wordly. If you are really spirit filled and born again, you won’t really ever have temptation again.  It’s legalistic to ask for chaperones, because that implies your kids aren’t born again.  It’s good to be involved in politics, but if you care too much about this world, you might not be saved. A young man should own a home, with no debt, before he even thinks about taking a wife.

I could go on and on and on.  Some ideas are more or less biblical.  Others are downright comic.  All the truth and error just floats out there and people pick what suits them.

So picture the Egyptian guards falling asleep, and there being a clear stretch of land between you and the Red Sea.  You have the chance to leave,  but you spend the first five minutes of your escape arguing about courtship standards or the definition of wholesome entertainment.   Since this will be a new covenant people, there are some who want to make sure every particular is nailed down and affirmed.  And, tragically, it’s never the “weightier matters of the law,” that are debated, but the little man-made fences people find necessary for themselves, and everyone else.

In the end, many actually take pride in being a little different from the Egyptians, so they never even make an effort to escape.   A few other “leaders” actually exploit their flocks and make the entire tribe look bad.  The original injustice of Pharaoh, as a cause, is now sullied by the confusion, and in some cases the malfeasance of the departing shepherds.

But building a city on a hill, and entering the promised land, is no task for cowards, dullards or prudes.  You need to arm yourself with God’s Word, and not just the latest embroidery on the best web site. The camp will be attacked.  It will be betrayed.  It needs wise men, guided by scholarship, and prayer, to ward off the snakes.   If you are anxious to find the land flowing with milk and honey, you will need more than your feet to get there.  You’ll need your heart, and your mind.    If someone starts talking, or acting, like a nut, say so.  Don’t retreat to Goshen.

Kaysville
The Idea of Us