And after Boaz had eaten and drunk, and his heart was cheerful, he
went to lie down at the end of the heap of grain; and she came softly,
uncovered his feet, and lay down. 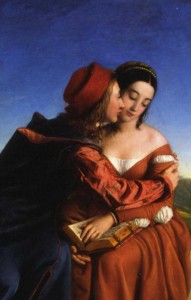 Christopher paused, in the middle of removing his necktie, and smiled at his wife, Daphne. “Thanks for helping me,” he began, “with that thing — with Clark.  I didn’t know what I was going to say, and it was great having you there for moral support. I know you wanted to take the girls shopping, but it meant a lot having you there.”

He removed his tie and picked up his coat off the bed.  “I got you something.”  He rifled through his pockets and pulled out a small leather journal.  “I found another one.   120 blank pages.”

She paused, arching an eyebrow, flashing the smile that was difficult to read.   There was a request on the way.
“Christopher?” she asked.
“What?
“Keep the lights on.”
“Keep the lights on?”
Daphne unbuttoned her blouse.  “And close the door,” she said.

When you ponder the profound mysteries God layered into human sexuality — and I’m quite confident no one really understands the divine cuisine very well — the contrary bargaining positions of men and women, the nature of what they are really buying from each other in the act itself, is so completely at odds, it feels something like a managed series of explosions.   It rumbles on, before and afterwards, two spiritual chemistries–at playful, galling war with each other.  It’s never been as simple as matching complimentary parts, or sticking two attractive faces in front of each other. The Grand Designer appears to have wanted this all to be a simmering, pleasant, annoying war.

Consider how extremely unlikely it is for a husband to tell his wife, “all you want is sex.”   Ponder how strange it would be for a young relative of a widowed queen, in the Bible, to sneak into the courtyard and plop himself down under her blanket.  (That would mean an execution, not a wedding feast.)  And be honest, gentlemen: think about the last time you read a story about a sixteen year old high school boy seduced by his twenty-seven year old, slightly dishy, high school English teacher.    You don’t even have to respond to the story. Your wife hits you in the ribs for what you were only about to say.

For want of a better term, female sexuality is far more “pure” than ours is, guys.   It’s more holistic, more rooted in the nest, more solidly connected to raising children,  and, in way, by itself, far less important to them, in the grand scheme of things.    It’s far less likely to “work,” unless it’s safely enveloped in the happy glow of emotional security.   There’s a reason why trash-mouthed comics, like Sarah Silverman and Jane Lynch achieve that jarring, shocking laugh:  we don’t expect women to talk that way.  Even after feminism, we have a higher standard for the ladies.

And men need sex far more than women.   I know a young couple who argued about who had the stronger sex drive — men or women.   The wife kept insisting it was just about the same; that men only claimed they had a stronger sex drive, so they could justify straying, but the husband in this case, was always true.   After five years of marriage, the wife just sighed, smiled, and conceded:  “I give up,” she said.  “Men do need sex more than women.”

In Christian circles, all of this gives women the upper hand in forging a truce between the sexes, because their sexuality appears to be far more spiritual than their brothers’.  Men are counseled to understand their wife’s emotional needs, their needs for conversation, thoughtful presents, a back rub that doesn’t mean anything other than a back rub.   Wash the dishes, take out the trash, drive the kids to soccer, help her with all the trials of motherhood, and when that happy emotional umbrella casts its full warming glow over the two of you, your next sexual encounter will be as pure  and pristine as Christ’s union with the church.

Doesn’t that all feel a bit more like church talk to you?

Unfortunately, in a very real sense, it doesn’t completely feel like scripture and it runs the risk of making for some very bad sex, because once a woman’s nesting needs have been addressed, she actually does want Tarzan, and not Mr. Rogers. The Bible, moreover, is a pretty hot property.   Adam awakes from his first nap, and he sees the naked Eve standing there in the garden.  They are “naked and unashamed.”   Now, to be certain, the Bible depicts both approved and unapproved sexuality.  Potiphar’s wife is the sort of slut that gets you put in prison, and some chicks dance so brazenly, and with such ugly intent, you end the day looking sadly down at the severed head of the baptist.

But the writer of the Proverbs has this to say, by way of preventing you, young man, from falling into the company of strange women: “Let thy fountain be blessed: and rejoice with the wife of thy youth. Let her be as the loving hind and pleasant roe; let her breasts satisfy thee at all times; and be thou ravished always with her love.”  The picture here, and in the Song of Songs, is one of what you would have to call erotic abandon within marriage.  Sex for sex’s sake.  Lovers who are so taken with each other, they spend the evening in utter abandon, turning the bride’s navel into a goblet of wine.   The writer of Hebrews called this, the marriage bed, “pure and undefiled.”

These days, you are apt to hear pious advice about the use of the term “hot.”  She’s hot.  He’s hot.   I can’t believe how hot you look. That dress is hot.   It all inspires this Sunday School remonstrance:  ‘You should never describe a daughter of God as a temperature.‘

Really?  But what if she is hot — meaning her form, her face, her body fill you with desire?  What if she happens to be your wife?   Would the same clucking pietists have shuddered at the mention of “breasts,” even if it came from the divinely inspired pen of Solomon?  Would Esther be disallowed the part in the church play, because, let’s face it:  she’s too sexy?

Our faith, after all, weds body and spirit.    The church, in many quarters, has fallen for the lie that we’re nothing but spirit.  It was born somewhere in our Victorian past, and it has been one of the devil’s great tools — turning that which is holy into that which is shameful.  The marriage bed has fallen into the “too much information” category and sex is only given any power, in our culture, when it takes place on the fornicators’ couch.  Detached from its natural boundary, it becomes a god in and of itself — and it morphs into an obscenity.

The church needs to get back to striking the bargain properly.   Sex certainly is about love, about partnership, about friendship, but Christian women should be temptresses behind that door as well — and proudly so.  God gave them a lot to show off.