Beating People Up with Jesus

“The goal of this command is love, which comes from a pure heart and a good conscience and a sincere faith. Some have departed from these and have turned to meaningless talk.” 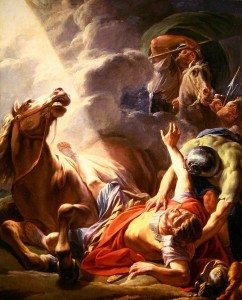 At lunch in the tavern, a friend of mine was marveling at our ability to deceive ourselves.

“You can blame your golf game on bad clubs,” he said.  “You can actually do that.”

“But we’re more sophisticated about it,” he continued, “and it’s all seamless.  It just comes out of us as a kind of low grade poison that you can’t really smell at first, but sooner or later everyone’s on the verge of death;  everyone hates each other, because there’s so much delusion and denial in the air.”

I had to agree.  We tell ourselves we’re contributing, we’re helping others see the truth, but, on some level, we’re just peeved the article in Vanity Fair we’re complaining about wasn’t written about us.

Perhaps the strangest of these delusions is found in the sharing of the Good News itself.  We can actually share Christ out of wounded pride, out of a conscious desire to hit back, to emotionally bloody someone with your scorching version of the Truth.   You might even use the call to repentance, not so much to heal, but to actually batter the poor sinner right in front of you.

This poisoned genesis works something like this:  you were made to feel small, un-hip, idiotic.  Someone called the Bible a “fairy tale.” The guy in the next cubicle implied you can’t read anything else. Someone with a nicer home actually looked over at you — as you were trying to keep four small toddlers from misbehaving in the grocery store — and it was clear she appeared to pity you.

I’m ashamed to say I’ve been there so many times I’ve lost track. Some swishy, insufferable orientation-supremacist accuses me of “hate,” and I hate right back.  Big time. It’s so utterly clear they are full of hate for me, and everything I hold dear, that when I mention Christ, it’s not really in the spirit of offering a  savior.  I’m asking Big Brother to crush his spirit, to humiliate him.

And that may be true.  He really may be a hateful, twisted wreck. He might even be dangerous — the sort who screams for a sacrificial victim outside Lot’s door.

But I’m not really talking about him in the last analysis — I’m talking about me, about us, about our motivations in doing, or saying anything.  Have we stopped to make sure those motivations are pure?  In the service of the truth?  Or are we recovering from an eleven year old beating us at chess?

Saul of Tarsus wasn’t just a jerk.  He was a murderer.  He was a collaborating prison guard at Auschwitz.  He was a legalist prick, completely and utterly dead in his sins.

And yet in that moment when he was struck down, helpless, blind, confused, humiliated, wasn’t he something like all of us?   Isn’t he something like the little brat on the playground who suddenly gets knocked to the ground by big brother?  There’s a moment of justice in it, to be sure, but if you look closely, in the sudden fear of the victim, in his tears, you might see something quite like change, some new creature there being born.  You have to have enough love to be ready for it.

I know I’ve missed it, many times, or actually hoped it wouldn’t happen at all — and it wounds me.

A prophet should have tears in his eyes, even when he’s yelling.