You won’t hear scripture quoted very much, over Sashimi in Santa Monica or among biscuit nibblers at the Yale Club in Manhattan; the words of the Bible make the well heeled and the hip look away, awkwardly, as though you were trying to sign them up for a multi-level marketing program.  They see scripture as the figurative province of a gaunt, bloodless, 31 year old virgin who screams repression underneath the humorless exterior. This caricature is well established in film and television, and you don’t even have to be Cambridge or Palo Alto royalty to fear it. God’s word, unlike literally every other century in western civilization, is now considered, at best, singularly out of place in policy discussions and horribly out of fashion over a glass of wine. 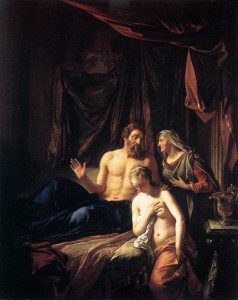 Most of the people who run from God’s word on this account aren’t smart enough to understand it, so my complaint today isn’t about people who have intellectual objections to the Bible. It’s about another, more primal set of fears:  being out of fashion.  Being alone.  Being bored. The Great Book that begins with two naked lovers in a garden, by their standards, just isn’t sexy enough.

But those of us, in and out of the church, haunted by the specter of the lifeless pietist and the dreary prospect of a life without joy would do well to consider our cowboy Father Abraham.  Whether you’re worried about your salvation because you feel too “worldly,” or you just can’t stand the Bible because you think it’s something Jon Stewart wouldn’t like, you should seriously consider the life journey of Abram, from Ur of the Chaldees, AKA “Abraham.”

He’s the picture of a life well lived.

Abraham makes a fair set of appearances in the Bible.  You see him in 16 books of the Old and 11 books of the New Testament.  He’s singled out by God for divine blessing, but it’s not the sort of blessing you imagine filtering down through the quiet light of stained glass in a cathedral.  He’s no silent celibate in a hair shirt.  He’s a cattle baron, and as rich in silver and gold as any banker.  When his nephew Lot was taken captive, Abraham armed 318 of his men and rescued him, liberating Lot’s stolen plunder and women folk at the same time.

Abraham and his wife were real human beings.  They made some mistakes.  He was afraid that his life might be taken by a godless king and that his beautiful wife, Sarah, might be stolen, so he neglected to mention their marital status.   When God promised Abraham and his wife a child in their old age, they laughed at the notion, but their love life must have been pretty good, at one time, since Sarah observed “After I am worn out and my lord is old, will I now have this pleasure?”

Abraham has what you would have to call a downright chatty relationship with God.  When God promises to destroy Sodom, Abraham interjects:  “Will you sweep away the righteous with the wicked?”  He then proceeds to bargain with God, wondering if he can find 50, then 40, then 10 righteous men, would the Lord save the city?

At times, the life of Abraham and Sarah appears to be a regular soap opera.  Sarah gives her Egyptian servant woman to her husband, “to wife,” and they sleep together, conceive a son, and then the servant woman “despises her mistress,” lording the boy over her .  There’s the heart breaking account of young Ishmael being sent away and nearly dying.   There’s the singularly uncomfortable picture of Abraham being tested, and likely Isaac as well, in the story of God asking Abraham to sacrifice his own son, the son “he loved.”

If that isn’t earthy enough for you, near the end of Abraham’s life, we see that he gave “gifts to the sons of his concubines.”  That would be concubines with an “s.”  Righteous Abraham had many wives.   Not mistresses, mind you, not secret adulterous lovers, but many women who lived in his household, shared his bed, and gave him children.

(At this point, if you’re like some of the men in my fellowship, you’re sharing high fives and looking fearfully over your shoulder to make sure the wife isn’t watching.)

Abraham was the dude.  He was wealthy.   He was brave. He was passionate.  Above all else, his righteousness was not based on any perfection in his own life, although he gives every indication of trying to be honorable, and tolerant, in the way he conducts himself. His righteousness was based on his belief. “Abram believed the Lord, and he credited it to him as righteousness.”  Gen 15:6

In return, God goes out of His way, in scripture to indicate that Abraham is not among the dead but among the living.  When Jesus tells the story of one evil rich man who never fed the poor wounded Lazarus, He makes sure we see another rich man, Abraham himself, who comforts the poor man in heaven.

When Jesus promises a heaven populated by more than just the blood kin of Israel, by people from “east and west,” the feast is hosted, among others, by Abraham.

Believer and non-believer alike, let it be known:  the Kingdom of Heaven may be far more full of hard living cowboys,  knife wielding fishermen and penitent harlots than you might think.

You ought to check it out.

Beating People Up with Jesus
Is Living Allowed?
Ads by Google