When a small, veiled woman never spoke, as her husband attacked Trump’s sacrifice and Constitutional literacy, Donald’s response only expressed what we were all thinking.. 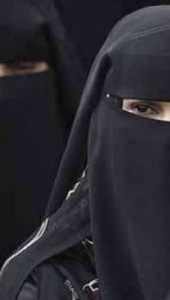 It shouldn’t be that startling an idea, but apparently people need reminding:  different cultures produce different outcomes.  If your family honor depends on scholarship, you’re bound to have a few more professors in the family tree.  If all the alpha males in your clan have been to prison, you might spend some time there as well.  If, as girl growing up under Islam, you remember hearing the Arab proverb, “Beat your wife regularly; even if you don’t know why, she will,” you might not be the first one up to the podium, and you just might let your husband mouth the slander, thank you very much.

The Kahn family were willing participants in political theater when they lamented Donald Trump’s positions on Muslim immigration.  It may have been, from their perspective, a passionate statement of protest about the meaning’s of their son’s death.  They have the right to speak — and they also have the right to be ridiculed for their conclusions — namely that Donald Trump has never made any personal sacrifice for his country, or that he has never read the Constitution.  Frankly, in all of this, it looked a little predictable for the grieving Muslim widow to remain silent.

After all, what did Donald Trump communicate except what everyone already knows?  That Mrs. Kahn’s symbolic silence represents, very well, the plight of Muslim women worldwide:  In dozens of countries like Egypt, 90% of the women endure female genital mutilation.  (The practice is ascribed to African culture, but Islam hasn’t been very successful in restraining it.)  We see, nearly daily, the barbaric practice of the Islamic State sex trade, up to and including burning alive women and girls who refuse to participate.  Saudi Arabian women can’t drive a car, and Sharia law declares  a woman’s testimony to be half that of a man’s in court.  The plight of women in Islamic cultures is so deplorable, Pakistan actually needs to debate a law against honor killings. Do we really need to make a systematic case here, folks?  Any culture that puts women under a mandatory black bag in public isn’t exactly “I am woman; hear me roar.”

When you contrast Mrs. Kahn’s appearance to the passionate remonstrance of Patricia Smith at the Republican National Convention — who defended the memory of her son killed in Benghazi, and the criminal neglect of Hillary Clinton — the clash of cultures could not be more clear.  Western women speak truth to power.  Muslim women cower behind their husbands.  If Mrs. Kahn enjoys any protection from the approved abuse of Islamic culture, she owes it to the west, and not to Mohammed.

Trump just called attention to this silence in a way everyone else was either too polite to notice, or too fearful to express.  Don’t blame the Donald.  Blame the poisonous source of both Islamic terror and female abuse:  the cult of Islam itself.