My War on Flip Flops 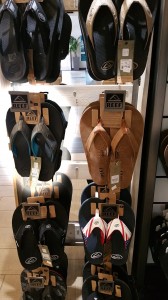 Some of you are completely unaware of your talent, and, frankly, it disgusts me. You’re one of those people who can just leap out of bed, pull on your shorts, and jump into your flip-flops, like it was nothing — like it was breathing or drinking a glass of water or taking in an effortless 5K run and then downing a mango smoothie with your friends at the local juice bar. You make me sick, this casualness of yours. Where did your friends come from, anyway?  With their flip-flops?  You don’t even have to ponder this stuff, do you?

Let me remind you, when you wear flip-flops, that little piece of rubber, that stem or whatever it is, that thing that goes between your big toe and your second toe (am I the only one bothered by the lack of precision in naming flip-flop parts, by the way?), that THING is the ONLY thing holding the flip flop on your foot, and most of you people don’t even THINK about it.  You just walk along without concentrating.

You know what happens when you concentrate on that thing?  It comes loose, people.  You could be on hot pavement and there your flip-flop would fly out in traffic somewhere. You could be trying to walk, casually, into a kind of casual beach-side party that you can’t believe you were invited to, and you could flip that flip-flop right into the bowl of sangria and the hostess would be thinking, “okay, I remembered why I didn’t invite Jim last time.”

One friend of mine — a real leading man type, who has been in the movies, the jerk — told me just to have “faith, let it go, just go with it.” Right. As though you could just kinda pretend that one of your absurdly long legs wasn’t more or less constantly in danger of propelling a flip-flop across the grocery store and injuring a small child.  Every one was having a good time until you came along, but because you lacked faith, a four year old is crying and trying to run away from you, making you look even more creepy.

And that’s the heart of the matter, really.  This casual faith some of you have.  You don’t even know you have it.  Sure, I could train if I wanted to.  I could wear flip-flops, alone, in a controlled environment, and I could practice not thinking about that solitary little rubber thing (What IS the name of that thing?  Will SOMEONE please just make a diagram or something?) and maybe I could start to have some reasonable assurance of not causing damage with my footwear, but I know what would happen.

I’d come to the party in flip-flops and none of you would say anything, obviously.  No.  You would be polite, but you would be thinking it: “hey, Jim’s wearing flip-flops.  Just a heads up.”  The party would suddenly get very cautious, as though I might land a flip-flop in the deli-slice fiesta assortment.    I might round a corner and the words, “he’s got them on,” and I’d say, “got what on?” and you would say “oh, nothing.”

Look, you don’t fool me, you utterly casual, informal people who could probably make a power point marketing presentation in shorts and a tank top or something, in the office, on casual Friday.  I know what you would be saying to each other on the way home:

“Can you believe Jim thought he could wear flip-flops?”
“I know.  Sad.  Some people just don’t have it.”

Written on the Heart
My Fight with Junior
Ads by Google