My Fight with Junior

I got in a war of words with a prominent reformed pastor the other day.  I’ll call him “Junior,” because my fight is not so much with him, but the error he represents. Through the miracle of of Facebook, we went head to head.  There’s no fight quite like a theological fight, and this one was no exception. My topic was provocative.  “Do you take into communion believers who vote for pro-aborts?” 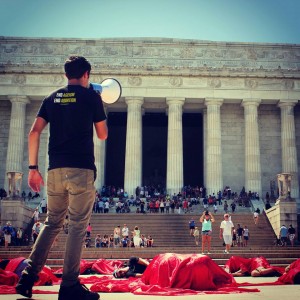 For many years, this issue has characterized, for me, what I would call the “Hey, Dummy” age of the Holy Spirit.  There’s no question that the killing of children,  by their own mothers, represents one of the most colossal evils of our age, or any age.  It’s the kind of sin the Bible highlights, over and over again in the Old Testament, when God laments the ugly act of Molech worshipers making their children “pass through the fire.”   This is a reference to a particularly ugly set of Old Testament generations that actually burned children alive in brass altars.  God’s wrath was provoked, and the children of Israel suffered famine, military defeat and ultimately exile.

Abortion is a tad more sterile, but no less evil.  The god today is “convenience” and the altar is an abortionist’s surgical chair, where he saws out the new little life by literally cutting the child in half.  If you are a believer, and you know this, and you aren’t saddened, and angered, by this reality, my sense is that you never really knew Christ.  How could you?  After being pardoned for your sins,  the merciful King of all Creation says to you, “go and sin no more,” not “go and kill some unborn babies.”

Now of course, people sin.  We stumble.  Some believers may fall into a very dark space and make a tragic mistake seeking an abortion. We’re not talking about people genuinely sorry for both their past sins and their current struggles.  This is not about forgiving penitent, post abortive mothers.  Nor is this about the studiously ignorant believer who likely attends a church with a pastor too cowardly to call attention to the evil in question.  The sheep bear much less blame if they are being tended by a hireling.

No. I’m talking about the proud pro-abortion “believer.”

They fall into a few categories.  There is the sophist, who believes in “choice,” which is something like saying, “I don’t believe in bank robbery, but I know some people need cash from time to time, so I’m pro-choice.” Does that sound very Berean to you?  Christianity isn’t for idiots, nor for people terminally given to these gross rationalizations.  A pro-choice believer is a pro-abortion believer, and Christ is not mocked.

So far, so good.  “Junior,” I think, would agree.  So now we proceed to the believer who knows abortion is wrong, but they care about so many other things.  Economic growth.  Global warming.  Universal health care.  Fair wages.  These are the believers who scold us about being “single issue voters.”  I’m sad to report that one “reformed” believer said he was voting for Bernie Sanders because “no politician can do anything about abortion and Bernie will fight global warming.”  (Both the Adam Smith and the Christ in me are cringing as I recall that exchange.)

Let’s ponder that one, would you buy economic growth for one million dead babies a year?  Would you feel happy about a better minimum wage if you had to kill one million babies to get it?  Would you happily sacrifice ONE MILLION BABIES A YEAR to get a president who really cares about recycling?

When life itself is at stake, all the other issues are secondary.  Life is basic.  “Life, liberty, and the pursuit of happiness.”  Remember?  If you are seriously bargaining your set of issues against the lives of children, you are living in a spiritual poverty. What’s more, you will never secure your bargain.  A politician who won’t stand up for life, won’t stand up for your checkbook, or your earth issues either.

Next we go to the Republican haters.  This group of believers have given themselves a personal pass to vote their pet agenda because Republicans are not really effective in the fight against abortion.  It is true that Roe v. Wade’s majority opinion was written by Harry Blackmun, one of Nixon’s little gifts to the republic.  It is also true that a series of Republican presidents, from Ronald Reagan on, could have done far more to protect life, but to say there is no difference between the parties on this issue is just willful blindness.

Faithful to the “self-evident” truths enshrined in the Declaration of Independence, we assert the sanctity of human life and affirm that the unborn child has a fundamental individual right to life which cannot be infringed.

The Democratic Party strongly and unequivocally supports Roe v. Wade and a woman’s right to make decisions regarding her pregnancy, including a safe and legal abortion.

In the years prior to Roe, with the exception of the Roman Catholic church, the pulpits of America were largely silent on abortion. Lawyers and judges do go to church, or they are affected by people who do, and both the Republican and the Democratic wings of the judiciary branch were full of moral illiterates on this score, but since the debate began in earnest, the parties have responded, and the platforms reflect their consensus.  The Republican party is nominally pro-life.  The Democratic party is proudly pro-death.  You have to look no further than Texas and other Republican run states for more confirmation.  In Texas, Republican administrations are curtailing the availability of abortions by vigorously enforcing health and safety laws.  It’s not a cure, by any means, but it’s a beginning.

And this brings me to my fight with “Junior.” I hold that proudly pro-abortion “believers” should not be offered communion in church. Junior thinks that — given the Republican party’s failure to bring abortion entirely to an end — folks like me are really “pro-death” too. If, in the fight to end abortion, we settle for small victories, one at a time, we are just as bad as the pro-aborts. Junior, on the other hand, will allow all one million babies to die, if he can’t save all of them. Any vote for a pro-life candidate who fudges on the exceptions of rape and incest is really a blood-in-the-eye pro-abort.  Since there is no purity on this issue, Junior presumably offers communion to everyone, proudly pro-abort “believers,” compromised gradualist believers, and utterly pure and Jesus-like believers like Junior.

“Exceptions for rape and incest,” of course, is a dodge argument. Those abortions represent a very small fraction of the whole, but they too are murder.   On that score, Junior and I would agree, but Junior grows heated with me when I want to scold actual ardent supporters of abortion, because, after all, I voted for Reagan and didn’t Reagan appoint a few compromised justices?

I’ve been down this road before.  It means being cajoled into spending every third Tuesday night at Mildred Triffle’s house, where we lick envelopes for the anti-Bilderberger party that enjoys registered voters in three states and holds its national convention at a Howard Johnson’s.  We watch videos about dark Masonic agreements on secret islands, and agree that only three men in the entire history of the 20th century were actually worth voting for.

Folks, we identify the major evils first;  we identify those who ardently support those evils, and if they won’t repent, we don’t offer them communion.  We should be attending churches that actively mock and ridicule and call to repentance poor political leaders by name.  Maybe that’s the problem?  Some pastors aren’t willing to defy IRS rulings about political speech?  Maybe they want to hold that church coalition together at all costs — even if the church and the republic suffers?  Is that Junior’s problem?

I don’t know, but he can’t seem to vote for anyone but Jesus Himself, and since He isn’t running, Junior offers communion both to outright baby killers and to those strategically picking their battles.  The church is supposed to be the “called out,” a band of sinners who fight their way through a compromised world.  It’s neither a temple of unblemished virtue, nor a butcher shop where the killing of children is celebrated.   Deny communion to unapologetic pro aborts and people who vote for them, Junior, but understand that some of us are willing to win one baby at a time.

My War on Flip Flops
Do the Right Thing