Fitting your life into a six minute segment.. 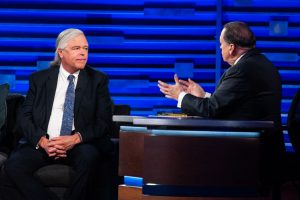 Prepping for the Huckabee Show

A funny, blessed day: yesterday morning, after a little online banking and email correspondence for the farm, I surfed Facebook a little, pondered a few bold points to make with Governor Huckabee on the show that night, and I registered some little micro-chunk of pepper or sesame seed (it couldn’t have been larger than a lady bug’s eye) that had dislodged itself on my front tooth. I tried to sweep it away with my tongue, but wound up forcing it up into some weird upper lip cavity that had escaped my attention these 59 years. It was a little annoying so I kept tongue-searching for the thing, when I noticed my upper lip was growing a little numb.

But I had this weird feeling it actually was something that didn’t bode well. I went into the bathroom and noticed a little swelling.

About ten minutes later, I went back into the bathroom and noticed the swelling was larger. No one else would notice it but me, but I had the feeling this wasn’t going to stop.

A few hours later I went downstairs to have lunch with a great guy, Mike Lermon. We’ve never met in person before (Facebook friends), but he drove up from Atlanta to talk about independent film projects. As I walked out the door, I asked Mary if my face looked swollen.

But I could tell it was getting worse. There’s nothing like sitting down for lunch with a new friend and having the sensation your upper lip and nose are actually expanding across the table in their direction. To make things worse, I must have thought extra water would heal me. I think I must have downed three of those 16 ounce hotel water bottles over the course of the morning. I was gulping ice water from the waitress and shoving little pieces of ice up there to arrest the swelling.

“Mike,” if you’ll excuse me. I went off to the men’s room and I registered the face of someone who had just been in a minor bar fight. “I wonder,” I thought, “could I tell the governor I got roughed up ..” No, dumb, dumb, dumb.

When I got back to the table, Mary had come down for lunch.

Oh, brother I thought. I have to be on Mike Huckabee’s show in three hours and I look like a golfing accident. I’m trying to talk to Mike Lermon about mutual friends and independent film and, suddenly, d’oh, I have to go to the men’s room. When I return from the men’s room:

Poor Mike Lermon. He runs off to a Walgreen’s with us. The pharmacist looks at me with vague suspicion. He hears my story about the sesame seed and thinks I’ve been in a fight. “If’ it’s allergic,” he said, “Benadryl might help, but if it’s physical, you’re stuck with Advil or something like that.”

So we go back to the hotel, stocked up on Anbesol, Advil, Ice and extra pizza slices I purchased so as to use the men’s room again.

I thought to myself, “I am swelling up like a volleyball with bad seams and I have to go the bathroom every 10 minutes. God or the Devil doesn’t want me to do this show.”

Anyway, the Advil and the Anbesol and huge bags of ice and time and prayer did the trick. I arrived in the green room only looking vaguely weird.

And I managed to pack the most pressing matters of my life into a six minute segment, which is what you have to do in an interview show, for a reason: get to the important stuff.

Ministry of Outcomes
Our Mutual Fight
Ads by Google