Your Cow is Licking My Solar Panel!

I’m trying  to imagine the life of a rancher, and I’m coming up short.

Mind you, I have a bit more experience than most.  I once woke my wife up at 2 AM, on a 37 degree February morning, to help me round up three Jersey cows that had broken out of their pen and were munching on our front yard lawn–200 feet from the highway, where they might have caused an accident. All of my children grew up milking cows at six in the morning.  We all made more Mozzarella cheese than anyone could ever eat.  I now have a small herd of about 20 Angus Lowline cattle.  I keep them penned.  I throw them alfalfa. I throw some really great barbecues.

But I’m a hobby farmer compared to Cliven Bundy.   His family actually turns out a big herd of 900 cows on the open range.   I just can’t imagine that:  rounding them up for  branding, knowing — every night — that their entire estate was out there without fences, vulnerable to mountain lions, rustlers, disease, the complications of first-time cow motherhood, and the do-good intentions of pensioned employees of the federal government.  Think about that for a moment:  would your first choice as a career be, yanking out a calf on a cold night, cow blood up to your elbows, and then wondering whether you would have to justify your trade to a full-salary BLM Ranger, drinking his 10 AM Starbucks the next morning? 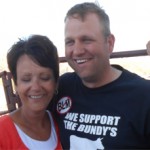 Have you seen the land Cliven Bundy ranches?  It’s a vast stretch of what most people would call gravel.  Up pops a desert sage here and there. If you can get gourmet double cheeseburgers, topped with cheddar cheese and bacon out of that ground, I say:  more power to you.   If the federal government really thinks it can raise cattle out on that ground, let’s all see how well the collective Kibbutz gets it done.  Anyone in the mood for a $149 Fajita plate?

But, of course, we know that the federal government is not really interested in lowering food prices.  They hate cattle.   They hate beef. How else can you explain the vast reduction in grazing allowances and the disappearance of so many family ranches in the area?   The feds are pricing the resource completely out of existence because the hamburger trade is politically incorrect, or because  — perhaps? — there’s more money for people like Harry Reid, if they front for a Chinese Solar energy investment, or they take the money of wealthy, liberal landowners who — all things considered — would prefer their desert backyards be cattle free?   (And we simply can’t sell all that federal land.  Wouldn’t that lower the price private real estate developers, who are politically well connected, get for their product?)

I can’t begin to fathom, much less explain, the many reasons why the powers that be are pricing the Bundys out of their trade, but the simple fact is this:  they are.

I just wish more people understood what it actually takes to make, and sell, a product.  When a guy gives up an honest living, and puts on a BLM uniform, accepts his paycheck every two weeks, and his tidy retirement, I really wish he knew what it was like to have to wonder whether the 500 cattle he has out there on the range will weather a bad winter storm and be there, a few months away to feed his family. It’s one thing to announce, arbitrarily, the number of grazing permits you will issue, and it’s quite another to actually turn those grazing permits into a family living.   Calculating the welfare of the desert tortoise, in an air conditioned office, paid for by the taxpayers is a much smoother ride than wondering if you can get the whole herd back for branding.

The rancher doesn’t have the US Treasury to draw on.   He has the fickle commodity markets.  He has a ranger breathing down his neck.  And now, apparently, he has helicopters and SWAT teams pointing rifles at his wife.

Is this really how the West was won — or is it how it’s all going to be lost?

When we Say ‘Worldly’
The Totally Hot Christian Woman