When we Say ‘Worldly’

“But to what shall I liken this generation? It is like children sitting in the marketplaces and calling to their companions, and saying: ‘We played the flute for you,And you did not dance; We mourned to you, And you did not lament.’ Matthew 11:16-17

I have a street-preacher friend who is a tad dispensationalist, a little on the pietistic side, and he videotapes himself preaching to “the lost” in what he calls “worldly” places — neighborhood bars.   He means well, and I have no doubt he lives to share the gospel, but I put his own language, “the lost” and “worldly,” in quotes, because I think we owe it to ourselves to question some assumptions we have about how we share the faith.

First of all — is a neighborhood bar really the sinister vortex of gross sin my friend seems to think it is?  Is that blinking, neon Coors sign one of the devil’s porch lights?  Is there something wicked in the green felt of the pool table, or an invitation to sloth in the  grinding of the blue cue-chalk? And, my word, is there money riding on this game? Is $5 a stake?  Why are the bottles of Jim Beam, Wild Turkey, Glenlivet and Bacardi sitting in front of a mirror, lighted up like colorful, translucent idols?

I’m not talking about some flesh temple with waitresses in black thongs and investment bankers snorting blow in the men’s room.  I’m talking about about the neighborhood bar and grill — that unpretentious little cinder block building where Vince Orloski and that other guy, Bill Travers, buy each other Budweisers over a grilled ham and cheese.

My street preacher friend, handing out tracts, was scandalized to find that a few of the old gents at the bar actually attended church.  “What were they doing,” he wanted to know, “here in this worldly place?”

But my question is — how do we make these “worldly” distinctions so easily?

Do not love the world or anything in the world. If anyone loves the world, love for the Father is not in them.

But that begs the question:  has something been lost in translation?  ..anything in the world?  There are several hundred million copies of the Bible in the world.  God’s people, His sheep, live and breathe and work in the world.   Don’t love them?

The Greek here, kosmos, is meant to be understood as something apart from just the physical world and our residence here, but “wordly affairs,” “the system of the world,” and the “adornment” of the world.    18th century theologian Matthew Henry wrote:

..the world, physically considered, is good, and is to be admired as the work of God and a glass in which his perfections shine; but it is to be considered in its relation to us now in our corrupted state, and as it works upon our weakness and instigates and inflames our vile affections. 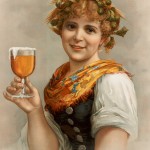 Can the neighborhood bar “inflame our vile affections?”  Certainly.  I know a woman who walked her leashed dog over to a neighborhood bar every morning.  She had trained her little Sheltie Terrier mix to drop a stinky treat on the bar’s welcome mat — this by way of justice for what alcohol had done to her husband.

But, thinking this through, we could direct doggy justice to many different door mats:  down at the donut shop, in memory of our morbidly obese uncle who ate himself to death;  over at the attorney’s office for facilitating, too easily, our sister’s divorce;  even, perhaps, on the steps of the chapel itself, for turning us into viciously self-righteous gossips, and thus on very dangerous footing before God indeed.

But my evangelist friend doesn’t conduct outreaches in donut shops or in an attorney’s waiting room, or in church , where he might actually be needed more than any place else.  He has decided, for some reason, that the neighborhood bar is the most easily visible representation of the world’s system, the most “wordly,” but if Jesus is any guide, wouldn’t the insides of a church be the most likely to represent the prideful ways of the world? Wasn’t He far more concerned with the prideful words that came out of a man’s mouth, than the wine that went into it?

I’m preaching this because I want him to be effective.  I want him to bring  the light to that bar with real power.  I don’t see anything at all scandalous about studying the Word, with Vince and Bill and the guys, after a game of pool, over a glass of beer and a grilled ham & cheese.  “..the world, physically considered, is good, and is to be admired as the work of God and a glass in which his perfections shine.”

If you go on a crusade against green felt, dark rooms, neon signs, and draft beer, you make more than just yourself look bad.  You make the message itself look silly.

Keep Talking..
Your Cow is Licking My Solar Panel!