City on a Lake, In The Hills 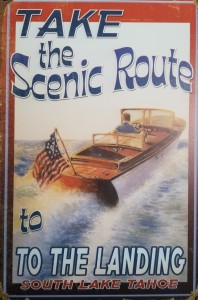 South Lake Tahoe.  I officially like this place.  It’s got a pronounced Emerald City vibe. The shuttle driver drove me past several Tin Men getting re-polished and Scarecrows getting re-strawed on the way to the Driftwood Cafe for breakfast. He connected me, mentally, to my family who took the same route an hour earlier. When he said, “have a great day,” I think he meant it. He appeared to be imagining my schedule for me, charting it out like a film director visualizing a bar scene and a few musical numbers.

The breakfast was very good. A kindly massage therapist at the hotel actually fixed my back.  I didn’t think so, at first, because I was still aching when I left. She appeared truly sad about her failure to heal, but her sweet sadness worked its magic and I was actually fixed a few hours later.  “Listen to your wife,” Mary said.  “I told you so.”

Seriously, though, can a place, a region, welcome you?  I’ve felt sincere affection for certain patches of ground in my life, and I’m not sure if this is rational.  In most cases, it was almost instantaneous. The architecture, the people, the food, the conversation all seemed to be saying, “yes, pilgrim, we know; rest here with us for a moment.”

I thought I would make a top ten list.