Mom & Pop Gain of Function Operations Spring Up All Over China 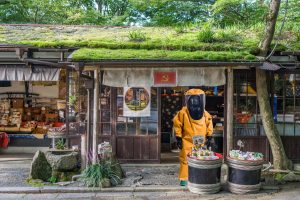 What do you get when you cross bat, monkey, and rat DNA with a pinch of  something called a “human furin cleavage site?”

“Very bad magic,” Yang Chao reports.  “We’re trying to create this year’s super lethal virus so that virologists and evolutionary biologists can figure out how to fight it.”

Chao and his wife, Daiyu, have a small herbal remedy store on the outskirts of Shanghai, but thanks to a generous grant from American scientist Anthony Fauci, they now have a small room with gene sequencing equipment, Capture RNA kits, Nuclease-Free Water,  and everything they need to make a super killer virus.  On a stifling hot July evening, they removed very heavy PPE gear, sprayed themselves off, and served up a pot of organic Longjing tea as they praised America’s Dr. Fauci for making their gene sequencing and manipulation work possible.

“Not everyone has the opportunity,” Chao observed, “to see what a really awful snake virus can do to a human being, if we just help it a little.  Pythons, for example, get something called “Inclusion Body Disease.”  They can’t turn themselves over, suffer paralysis, and stare at the sky until they die.  Shouldn’t we find a way to see if it could do that to a human being too?”

When asked if they were worried about the consequences of such a virus being spread globally, they looked very calm.  “Here in China, we can test these things on Uyghurs.  No problem.”

After an awkward pause, Daiyu looked up from her tea and said, “..this is my problem with Dr. Fauci.  He’s such a lovable little nut. He thinks we wouldn’t be willing to sacrifice our own people.  Has he even heard of the Great Leap Forward?  Bodies everywhere!”