Reviews: Drinking Buddies, Thanks for Sharing 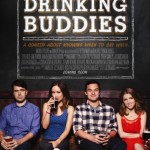 Kate (Olivia Wild) is what you might call the hospitality girl for a brand new Chicago brewery.  She introduces the brew to bar and restaurant owners, and she’s the prettiest, and only, girl in the small company’s employ.  She dates music producer Chris (Ron Livingston, Band of Brothers), and this relationship appears about as steady and grounded as the quiet  gravitas of his assets:  he plays music on vinyl; his family owns a lake house; his urban apartment radiates safety in hues of dark walnut.   Kate can’t bring herself to wake up there, and Chris doesn’t appear to like beer.  He’s a wine drinker, but there’s no pretension about it.  He fits right in with Kate’s co-workers, and before you know it, they are up at the lake house:  Kate, Chris, Luke (Jake Johnson), and Jill (Anna Kendrick.)

So up at the lake house, Chris goes for a walk with Jill, (Luke’s girlfriend), and Kate builds a fire on the beach with Luke (Jill’s would be, but won’t commit,  fiancé.)

It might just be the Calvinist in me, but that feels a little too Tahitian for my tastes, and it appears I’m not alone.  This casual indulgence represents the beginning of the end of their domestic felicity, and the bad choices ripple out to make the once happy young brewery a place of snarling ill will.  Although the language gets pretty blue, we’re not treated to any naked groping and panting, and it’s really just an exploration of some ancient truths:  sex isn’t a casual thing; dishonesty will destroy a relationship;  women should hold out for a marriage license.  Who can say whether the filmmaker was intending to teach those realities, but there they are.

The storytelling is precise, economic, and pretty deft at making a fairly ordinary sequence of events compelling.   The first 10 minutes of a movie, and the pilot of a television series, has to “lay pipe,” build the infrastructure and the premise in a way that makes it all comprehensible.   This can either be boring, or weirdly and unnaturally slick.   The balance is struck very well here.  Intelligent filmmaking on the whole. 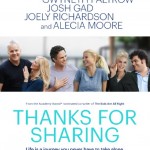 Ever since Sam Mallone, from Cheers,  tried to get the phone numbers of various female members of his sex addiction recovery group, I’ve been thinking Hollywood would try a big movie version of AA for sex junkies. Well, Thanks for Sharing is apparently what it looks like, and while it is competently told, it feels heavy on concept and curiously light on humanity.  It might just be too blonde (Tim Robbins, Gwyneth Paltrow, Joely Richardson) or it might be that Tim couldn’t lay down his politics long enough to avoid plugging the howling success of the United States Post Office, (thus inviting us to remember he is a proud socialist Hollywood heavyweight, making an important film about sex addiction, and he even has some political bonus material for you as well).

The two characters who actually succeed in bringing their characters to life, Josh Gad (“Neil”) and Alecia Moore (“Dede”), might have redeemed the story if they had been given more screen time, but that would mean less lingerie frames for Gwyneth Paltrow, horribly sunny as the triathlon trainee who can’t get enough sex from Mark Ruffalo (“Adam”), in his first relationship after five years of sobriety, thus setting up his downward spiral into internet sex and even a late night prostitute.