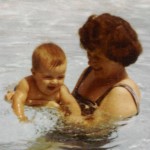 We were fighting over an airplane. That was my first memory.   The airplane was an apple crate, and we were three years old, and when you sat inside the crate, you imagined the cockpit and the wings and the propeller, and I remember it being a pretty good little reverie, especially if you could get my older brother, Flynn, to fly you over the campfire, as though it were a battle field below,  and then on, through the woods, to the rim of the canyon, where you can imagine one of those tragic early endings to life — someone trips and falls, and a child actually gets launched into the void, crashing to the bottom of Bryce Canyon on a family vacation in 1963.

But that didn’t happen, of course.  Our world was safer than that. Flynn was tall, squarely built,  nineteen years old, with several legions of guardian angels around him at all times.  We lived in a placed called “Arcadia,” in a neighborhood where substantial yeoman castles were tucked into an old oak grove, so that unlike the rest of Southern California, it felt vintage, shire-like.   Peacocks landed in our back yard.  You could hear the race track announcer at Santa Anita.   The oak trees were three centuries old, and they were too many massive tree limbs overhead, everywhere, for anyone to feel anything other than shelter and immortality.

It was a safe place, all right, so the truth is Flynn didn’t launch me over the side of the canyon.  We flew back to the campfire, where I fought with my cousin over the airplane, and that was my first memory in life, set to music –my mother singing “there’s a long, long trail awinding..”