The church is either ashamed of — or too bashful to speak about — real sex.  And that’s  a real shame.

Many believers disagree, but I mean to illustrate by means of scripture, and culture,  so follow along.

A certain woman I know, someone very dear to my heart, chides her husband about being overly fond of this verse:  “..A bundle of myrrh is my well-beloved unto me; he shall lie all night betwixt my breasts…”

I’m not picking on her.  I think she’s representative of most wives, who are churched in the Protestant world.  Platonic and fraternal love are considered the higher callings, the sort of love that stays up at night with a sick child or makes a meal for a troubled family down the street, or remembers that daffodils are Aunt Jane’s favorite flower.  Women tend to look at men talking about sex, as though they were little boys describing a really nice speed boat.  It’s something that we can perhaps allow for later, after we have budgeted for the more pressing needs of the kingdom. 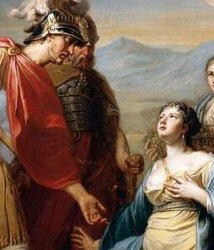 At any rate, post Queen Victoria (not blaming her, just her century: something is seriously wrong with an age that can’t use the word “arm” in polite company), the discussion of sex in the Protestant Christian world has fallen into the “secret,” quiet, hushed” category.  We are either protecting the children, or treating it as so sacred it doesn’t really sound like sex at all.  I lead a house church and even I don’t have the courage to preach about Song of Solomon, so I’m including myself in this weird, pietistic malaise, but the strange thing is…

The bible is just full — chock full – of sex. Have you read it?

God gives Adam a naked woman for a helper.  Abraham has a few concubines. Noah builds the Ark, in part, because some giant dudes are having their way with the daughters of men.  Dinah is ravished.  Tamar seduces her father-in-law.  Joseph gets his clothes ripped off  by Potiphar’s wife.  Phinehas uses a spear to kill a guy who has taken a foreign wife — finishing them both off with one blow, as they were consummating, In flagrante delicto .  Caleb promises his daughter, in marriage, to the first soldier who captures the enemy.  Gideon has several wives and seventy sons. David and Solomon  are not exactly, um, celibate.

I’m only scratching the surface.  There’s a lot more, a lot more. There are fair women, dancing women, lascivious women, temptresses, whore mongers, harlots, adulterers, and even some red-hot Godly lovers who abandon themselves to each other, drinking each other up like goblets of wine.

Here’s a little scriptural dance through the Bible and sex.  See if you can sum it up:

..unto the sons of the concubines, which
Abraham had, Abraham gave gifts..Genesis 25:5-6
Marriage is honorable among all, and the bed undefiled.. Hebrews 13:4
Flee also youthful lusts; but pursue righteousness,… 2 Timothy 2:22
Thy navel is like a round goblet,
which wanteth not liquor..  Song of Solomon 7:2
..whosoever looketh on a woman to lust after her hath
committed adultery with her already in his heart… Matthew 5:28
There are three things which are too wonderful for me,
Yes, four which I do not understand: .. the way of a man with a virgin.. Proverbs 30:18-19
Your two breasts are like two fawns,..Song of Solomon 7:3
Gideon had seventy sons who were his own offspring, for he had many wives… Joshua 8:30
A bundle of myrrh is my well-beloved unto me;
he shall lie all night betwixt my breasts. Song of Solomon 1:13
..let her breasts satisfy thee at all times,
and be thou ravished always with her love. Proverbs 5:19
..let each man have his own wife, and let each woman
have her own husband…Do not deprive one another.. 1 Cor 7:2-5

Anyone could make up their own sexual orthodoxy out of a few verses, and quite a few people have — particularly the pietists.  Since we live in such a grossly hyper-sexualized world, we are constantly reminded to avoid “youthful lusts,” but rarely are we reminded about the wonder of a “man with a maid” or a wife whose navel is a goblet of liquor.   It’s okay to bash the fornicators, but somehow — isn’t this weird?  — it’s not okay to celebrate hot married love?   The way King Solomon did?

A few years ago we were all trying a little Karaoke up at grandma’s, and I jumped in with a Jerry Lee Lewis tune– Chantilly Lace.   I don’t think I butchered it to badly, but a believer I respect very deeply called me the next day and told me he was worried about “nothin’ in the world like a big eyed girl…” and the whole “jiggle in her walk” thing.

At the time I was moved to apologize.  It did seem a little sensual, but then I thought — years later — are we under some sort of legalistic tyranny here?   All of my six, Godly, beautiful children are the product of a moment– a moment where I looked up and allowed myself to fall into desire, for a beautiful Godly woman.

Don’t make that into a trifle.   Call it what it is — a moment of abandon, to a pleasure GOD CRAFTED.

Memo to church, (and to a few of the ladies):  we’re not talking about a speed boat.