Most of us have a belief system, and most of wish the whole world shared our particular version of reality, but brute force can’t be the way we convert.  Islam has to answer for itself–or face the consequences.

I don’t think I know an evangelical Christian who doesn’t have big plans for world missions.  Christians hope for an entire world able to hear the gospel of Christ;  that’s why we convert the Bible into hundreds of different languages.  That’s why western congregations support missionaries abroad.  That’s why virtually every Christian broadcasting network features a globe and a cross.  We want the whole world. 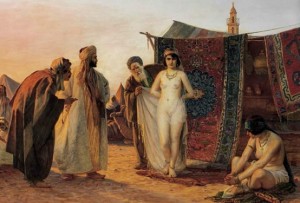 Similarly, most of the Roman Catholics I know, while pretty pluralistic, believe they possess the entirety of the God’s truth — or they wouldn’t be Catholics.  They are tolerant of other faiths, but they rejoice when someone converts to Rome.  Mormons send their young people all over the world, dedicating two years of their lives to spreading their particular version of what they call the restored gospel.   They don’t make any bones about it: they want the whole world too.

Consider any  movement:  from Scientology to Climate Change to the Justin Bieber fan club.  If you like something, you want the whole world to like it too.  On one level, it would be a poor measure of your humanity — knowing what you think is the truth and not wanting everyone to share it.

But minds are a bit like love — they can’t be won over by fear or by force.  They can only be raped, or destroyed using those tools. The great evil of totalitarian political systems, like Communism and Islam, is that they don’t trust themselves to win over hearts and minds by reason or by faith.  They insist on locking up the bodies first and winning over the minds by inflicting the kind of pain, and fear, that turns humanity into emotional and intellectual slaves. There’s a reason why the Arab world borrows its science and technology from the west:  innovation and fatwas are not soul mates.

Like millions of Europeans taken captive by Islamic slave traders, cabin boy Thomas Pellow’s story is representative of the Islamic reality.  Taken captive on the high seas in 1715, eleven year old Thomas found himself a slave in the cruel Islamic Kingdom of Moroccan Sultan Moulain Ismail.   When persuasion didn’t work, the world of Islam advanced in other ways:

Pellow’s beatings were brutal affairs. They were personally administered by Moulay es-Sfa, who took delight in thrashing him senseless. He would work himself into a terrible rage, “furiously screaming in the Moorish language, ‘Shehed, shehed! Cunmoora, Cunmoora! In English, Turn Moor! Turn Moor,’ by holding your finger.” This simple signal— raising one finger to the sky— was all that was required by Christian slaves to show that they agreed to apostatize. To many Muslims, it was a signal that they denied the Holy Trinity.   (Milton, Giles (2006-06-13). White Gold: The Extraordinary Story of Thomas Pellow and Islam’s One Million White Slaves)

Pellow’s treatment was the horrific norm.  From the 15th century to the 19th century, Europe and America routinely paid ransom tribute for captured Christians, and European states typically paid tribute to the Barbary Corsairs so as to conduct trade safely in the Atlantic and the Mediterranean. The Somali Pirates of the 21st century are only the most recent in the long line of Islamic thieves, living out the terms of their own religion, which, by Mohammed’s explicit approval, allows for the pillaging of the infidel.

But, you say, you know a guy down the street who is Muslim.  He has a fine family.  His kids are in your soccer league.  His wife reads Cosmo. They look pretty durn Western to you.

Of course you know them.  We all do.

But here’s the problem:

Right now, all over the world, people go through a little packing ritual when they take a flight.  They look at their fluids.  They check updated lists of what they can carry on an airplane and what they can’t.  They unload their pockets and hope all of their metals made it into the tray for the x-ray machine.  Some Lutheran old ladies even get groped by blue-gloved TSA officials, just so they can prove this is not a religious thing.

But it is.  We go through all of this, we ponder the loss of even more freedom, largely because of a single threat:  Islamic terrorism.  Paris wasn’t just shot up by Tennessee Pentecostals.  Ft. Hood wasn’t the victim of a crazed Baptist.  The London bombings weren’t hatched out by disgruntled, high church Anglicans.

They were the work of well to do, seemingly western, radicalized Muslims.

No other world religion, no self-help cult, not even any radical environmental group commits this kind of terror with anywhere near the frequency  of those who act in the name of Mohammed.

We all know this.  Even the folks who wish it weren’t true, know this. Even Barack Obama knows this. It’s the 900 lb gorilla, sitting in the room, wearing a Burka and holding a detonator button, and we won’t talk about it, because, we are told, there are 1.3 billion Muslims in the world, most of whom are peaceful.

Well, even if we ignore the troubling polls indicating that 88% of Egyptian Muslims favor the death penalty for those who leave Islam,  or  that 33% of American Muslims feel Sharia should supersede the Constitution,  we have to confront some dramatic questions:

How can a tolerant, free society absorb a population whose faith is dedicated to intolerance?

Why has the world never seen a majority Islamic nation that truly guarantees freedom of religion, freedom of expression, and the freedom to bear arms?

Be honest: are western freedoms made more or less secure by growing Muslim populations?

The debate is over, folks.  We’re fooling ourselves if we think Islam and democracy can coexist.

There may be billions of them, but we won’t solve the problems they pose unless we agree there is something lurking in Islam itself that is more than a little dangerous.  The sooner we can talk Muslims out of Islam itself, the more we’ll show we love them, and love ourselves.