The poor is hated even of his own neighbour: but
the rich hath many friends. — Proverbs 14:20

Want to stay spiritually closer to your kids and grandkids?  Start a family business.

Money makes for friendship, this I know — for the Bible tells me so.

Most folks have a hard time admitting that, or allowing for it, because we know filthy lucre doesn’t buy heaven either, but Jesus tells us God can do incredible things — even stuff a rich, disgusting, morbidly obese man through the eye of a needle and land him in heaven. (I mean if he can do it for a camel..)

This miffs a lot of small minded church folk: the guy with the five talents gets 10?  Those who have will be given more?  Those who have just a little, will have that taken from them? The virgins who have their lamps prepared don’t share oil with the provision-challenged virgins? This  sure doesn’t sound like the Occupy Wall Street version of the faith that I grew up with as a child. 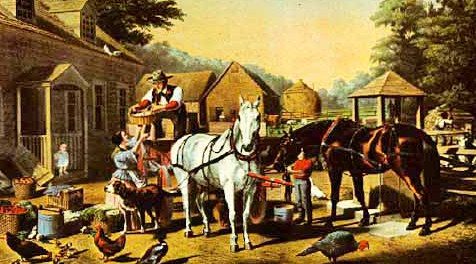 Many Christians, and money, are something like pacifists with violence.  Peace sounds pretty lofty when you’re a coward, and money sounds evil when you’re too lazy to work for it.  Yes, I know there are people of true conviction on each front, but I also worry that we are losing our practical sense of what God says about money and wealth:  it’s not evil by itself;  it’s evil when you worship it, when you aren’t willing to make free with it, for the building of the kingdom.

Which brings me to my topic — an inter-generational family dynasty, or at least mini-dynasty.

At the outset let me just say that dynasties, for various reasons, are officially out of vogue this week.   But next week they will be back in fashion because God loves dynasties, and not just His own.  He has a habit of promising inter-generational blessings to mere mortals.  Abraham gets wealth, and flocks, and wives and children dumped on his head for being faithful.  Aaron was promised an inter-generational trade, caring for the Lord’s altar.  David is promised, and receives, a throne that will be passed down through his sons.   Mary, the mother of Jesus, is promised she will be remembered by all generations.

God loves continuity.  He likes people on their own land, every man underneath his own vine.

And so do we, don’t we?   Don’t we like families who have been in the same trade for five generations?   Isn’t there something beautiful about walking the rows of a vineyard tended by your great grandparents and their parents?   Sure, we make fun of the rich kid, but we’re also quietly in awe, as well.  There’s a part of us that thinks, yes:  this family has something, gravitas, breeding, wisdom.

The truth is that a family, on this earth, can abide a few doctrinal differences.   One brother might be a sprinkler and another a full dunker, one sister a free will Baptist and another a seventh day charismatic,  but day to day, it is the applied theology of a family business that keeps them coming back to the table and sharing each other’s company.

My own extended family has lots of theological divisions, but we’ve all been at different versions of the same family business since around 1952.  Not everyone worked for the business at the same time, but the business was always “there” in family conversations.  We  shared the same trade language.   Nowadays, we all know what it’s like to price a banquet or stand on stage, or give a farm tour, or attempt to please a customer unhappy with u-pick.  It’s our common trade. Unlike a church fellowship, where you only have to deal with unpleasant people for two hours a week, we all have to at least attempt to smooth out our unpleasant edges, since we see each other every day.  This is church — all week.

It isn’t easy.  Our little family feuds have even made the LA Times, but I wouldn’t trade it for anything.   I actually enjoy being part of a big, angry idea-swapping band of Celtic mountain folk — and I’m always happy to see new little branches grafted in.  (There’s a Cuban girl I think would be great for Lockton or Gabriel, but enough said on that score for now..)

In our culture, we mythologize the starry eyed adolescent who wants to go off to New York and make a name for himself.  Most of the time, that just means paying monster rent, and a quiet exit to the suburbs four years later, but I don’t think there’s anything wrong with that. It’s good to live your dreams, build your skills, seek out the big city. However, the hometown big band of 300 brothers and cousins in one county isn’t a bad thing either — and it deserves more mythology.

Our nation allows government to grow out of control in its size and scope, but we purposely try to kill extended families.  We “trust” the gargantuan institution but a republic full of powerful, extended families?   Doesn’t that reek of patriarchy and provincialism?

Perhaps, but we’re all seeking community too.  There’s a reason our little place — Riley’s Farm — is now the “over the river and through the woods” destination for so many suburban families, but the fact is any family business can represent that, in any environment.   Extended families should be in business together.   Raising children is easier if you and your sister in law share the graphic art department. Retirement planning is easier if you have the weight of family capital behind you.

God may be closer, if you have to live your faith every day.

A Conversation With Ruth
C’mon, Baby, let’s do the Twist…