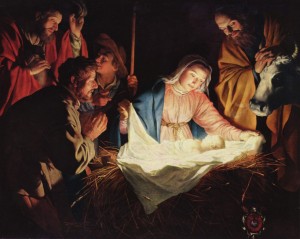 I have a soft spot for anyone seeking an explanation for the universe, and our place in it.  I suppose that even includes the judgmental and the irritating, because the pursuit itself is desperate for self assurance.  We’re all trying to box up our foggy doubts, to turn our spiritual conjecture into solid stepping stones, to make knowable that which cannot be seen–and the journey doesn’t always bring out the best in us.

To wit, let us ponder:

Now the temptation, after presenting my list of observed goofiness, is to claim goof-free purity;   but I think that’s my point in all of this.  I don’t.  I’m as goofy as they come.  I’ve wandered through Mormonism, agnosticism, Catholicism, fundamentalism, and I’ve now settled on perhaps my own version of reformed post-millenial dominionism, which may yet prove to harbor more than a few goofy bats, anxious to wing moon-ward when scared off by the torch of truth.

Still, my sense of the universe, and our place in it, gets more simple, and more complex the older I get.  When I read a story about a man who jumps into the wreckage of a burning car, to save a family he doesn’t know, it all gets powerfully simple.  What dreary little denominational dictum can stand before such love?  How can my coldly clinical friends explain this?  Would eschatology or global warming dare to weigh in?  Why is everyone getting so emotional, anyway?  The man lost his life saving strangers; why is it that none of us can speak, we’re so choked up?

When I read the story of Medal of Honor winner Lt. Richard Antrim who saw one of his own men being mercilessly beaten in a Japanese prison camp and begged to take the beating for him, I sense a power that shames all of our small theological battles on Facebook.

When I hear the story of a young man who is homeless, dirty, hungry — having abused his family’s fortune, having lost all his money on prostitutes — and I see the boy’s father running down the road to welcome him back home, my sense is that love of this sort overwhelms us because it’s so completely contrary to our self-seeking routine. Its power is unearthly.  It rearranges the cares of the day, and chides you for worrying about the phone bill.  Your brother was lost — and now he’s found.

Conversely, the absence of that love, the hideousness we see in anyone who would abuse a child, or play “knock out” with an old person, simply because of their skin color, has a way of making things seem simple too.  This sort of ugliness screams for judgment, or supernatural healing love, or possibly both.  Do what you will with these extremes of love and hate, the fact is: you can’t ignore them.

So the simple part, for me, is that life represents a clear battle between good and evil, between love and its absence. If we’re open to it, we feel it in almost every moment of life — to help or not to help, to lie or to tell the truth, to bear an insult or to avenge it.  It’s there every minute of the day, and we fail about that often, in what we do, and what we don’t do.

Very few of us are Richard Antrim.  Even Richard Antrim isn’t Richard Antrim, all the time at least.  We’re dirty.  That’s why the cruel Japanese prison guards couldn’t believe what they were seeing. Love — real, selfless, Godly love — is an extreme exception.  In a very real sense, it doesn’t seem to come from us at all.  It comes from God Himself, because search our hearts as we will, we’re not very pure:

“Who can say, “I have cleansed my heart,
I am pure from my sin”?

And His cure for our condition was so simple that even today, we have trouble believing it.  It’s just too easy.  The burden is too light. Surely there must be  a shofar we need to blow on some special occasion?  Surely there must be a schedule of feasts, a diet, a genealogy we need to prove?  Surely I should put big black bags over my wife and daughters to keep other men from lusting, and, for good measure, maybe whip any man who doesn’t bag his women?

Just what do you mean “stand fast in the LIBERTY wherewith Christ has” made us free?  Liberty?  I thought religious life was about making things more cramped and joyless and difficult.

“For God so loved the world, that he gave his only begotten Son, that whosoever believeth in him should not perish, but have everlasting life.”

Go back through the gospels.  Take an inventory of Jesus offering any praise for mere men and women.  What does He praise? Sabbath observance?  Temple ritual?  Veiled modesty?  No.  He praises faith; he praises belief.  “Your faith has healed you,” he tells the woman who pressed through the crowd.   “Your faith has made you well,” he tells the blind man.   “Your faith has made you well,” he tells the Samaritan leper, the only one of 10 who returned to give Him praise. “Blessed are you,” he tells Simon son of Jonah, “for this was not revealed to you by flesh and blood, but by my Father in heaven.” When the thief on the cross, a man who, like all of us, could make no claim on heaven by virtue of his works, asks Jesus to remember him, when He comes into His kingdom, Jesus offers high praise for the thief’s faith indeed:  “today, you shall be with me in Paradise.”

Faith.  It’s so contrary to our human sense of order, isn’t it?  If a young man decides to go into the medical profession, it would be odd, in the extreme, to hear someone say, “you don’t have to endure four years of medical school; you just need to have faith.”  It’s the sort of career advice, today, that would likely get you locked up, with good reason, but God presides over a higher domain, a domain that literally speaks worlds into being with a word, that calms the physical storm with the voice of His son, that makes a mere glance at a bronze snake, held aloft on a pole, a cure for sickness and death.

He’s God.  If He promises eternal life for those who believe on His Son, who are we to say “it can’t be that simple?”

Now, after that simplicity, and subordinate to that simplicity, it may wax a bit more complex.  Faith leads to good works, and if the good works aren’t there, the faith isn’t either, but we’re not saved by “faith plus.”  Faith plus diet.  Faith plus Jewish feasts.  Faith but sensitive environmental stewardship. Faith plus raging diatribes against “pagan” Christmas celebrations. Faith plus shapeless denim dresses.

We can enjoy the theology after that, the fulfillment of prophecies, the hammering out of end time chronologies, the current demands of the moral law, but we won’t go to heaven, claiming to be saved by our orthodoxy.  If we ponder our “mighty works in His name” or our absolutely precise formulations of His doctrine, as though we were passing through a vocational school with passing grades, we’re pretending His blood isn’t enough.

We are saved by grace through faith on the Lord Jesus Christ.

Beauty Worth Fighting For..
Meet Me in Emerald City