Sometimes a really awful movie franchise comes along and you are almost lucky enough to miss it completely, but a local theater crime last week, described as an unprovoked double homicide, can’t help but pose the question:  does Critical Race Theory, popularized in C movies, lead dumb people to do evil things? 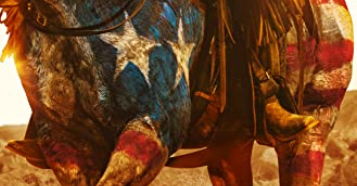 Time, and investigation, will tell I suppose, but the “film” in question, The Forever Purge, is described as the fifth in a series of what must be equally awful cinema, and the heavy-handed wokeness of the production actually brought to mind the sinister Jewish charactures of the Nazi era, except that the target this time is — can you guess? — flag-waving patriots and cowboys — right down to their chalk-painted mounts and their gun-crazed rants.

Adela (Anna de la Reguera) and Juan (Tenoch Huerta) are on their way to America, illegally, through a system of underground tunnels.  Juan is a kind of super vaquero who can talk the wildest steed in Christendom into sleepy submission and Adela dutifully encourages him to improve his English as they settle into their Texas life together.  Dylan Tucker (Josh Lucas), a wealthy ranch owner’s son, employs Juan and sternly warns his family he doesn’t want any Spanish spoken around the homestead.  Caleb Tucker, (Will Patton), the film’s Ben Cartwright and Dylan’s father, appears to be the only reflective Anglo on the entire range.

Every other flag-waiving Texan is enthusiastically preparing for “the purge” — a twelve hour suspension of all laws, so that the good old, (exclusively white), boys can engage in wholesale slaughter of anyone not sufficiently American.  The purge is presented as an annual ritual, requiring potential victims to fort up behind steel walls.  Even the local newscasters warn folks to get off the roads.  Juan and Adela know, of course, that in their new America they will have to endure the yearly blood-fest, but they think the odds are better than enduring ongoing Mexican drug-cartel wars.  I wonder if anyone questioned here the implicit violation of woke-orthodoxy: even a Texas with masked, death’s head rednecks is better than Mexico, but I suppose, like the entire immigration debate itself, the movie never really answers the question.  Why would any sane Mexican even toy with the idea of an America so thoroughly evil?

At one point, Adela is trapped by a band of ghoulish white purge-monsters and she is rescued by her black boss only to be accused, by white police, of fighting back after the twelve hour purge had ended.  While locked in a police van, two uber-racist fellow arrestees laugh fiendishly at the gunfire outside.  (See, here’s the catch:  this purge is not ending, people.)  The muscle-bound Aryan patriot inside the van describes the weapons outside by their acoustic signature, in a clear indication of psychotic gun-addiction.  Meanwhile, some of the white trash ranch hands decide to go full Marxist and conduct white-on-white purging as Ben Cartwright (I mean Caleb Tucker) and his family are tied up and threatened with execution for being rich and having options.  Old Man Tucker fesses up to stealing all the land from the Indians as he scolds the white trash-hands for doing the bidding of rich fat cats in Washington DC who authorized the purge.  The Tucker family is nearly killed when soulful horse-whisperer Juan comes to their rescue.

I stopped watching here, but I’m guessing the ending will settle, squarely, on a hearty commitment by people of all colors to love each other and achieve unity in a common hatred of whiteness, patriotism, and maybe private property as well.

It’s tragic, in a way, that really dumb movies have to be discussed, but there is a terrible price to be paid when we turn people into things.  I know a lot of liberty-loving patriots.  I know people who cry when the National Anthem is played.  I’m one of them.  These people–my people–are white, black, and brown.  They come from Cuba, Russia, China, and Africa and every corner of the globe.  In all my years of conservative political activism, among people who describe themselves as patriots, illegal immigration was never seen as a rejection of race, or culture, but a rejection of anarchy.  Describing the need for law and order as “racism” is something like describing a woman protecting herself from rape as “hateful.”

But the decision, by the production team, and the whole woke movement, to turn white people into ugly, fanged worms will come at a price, for both the victims and those deceived by the lie.  Have we learned anything at all from history?

Vaccine Mandates and Shirley Jackson’s “The Lottery”
Shock Poll: People With No Scientific Education Most Likely to “Believe the Science”